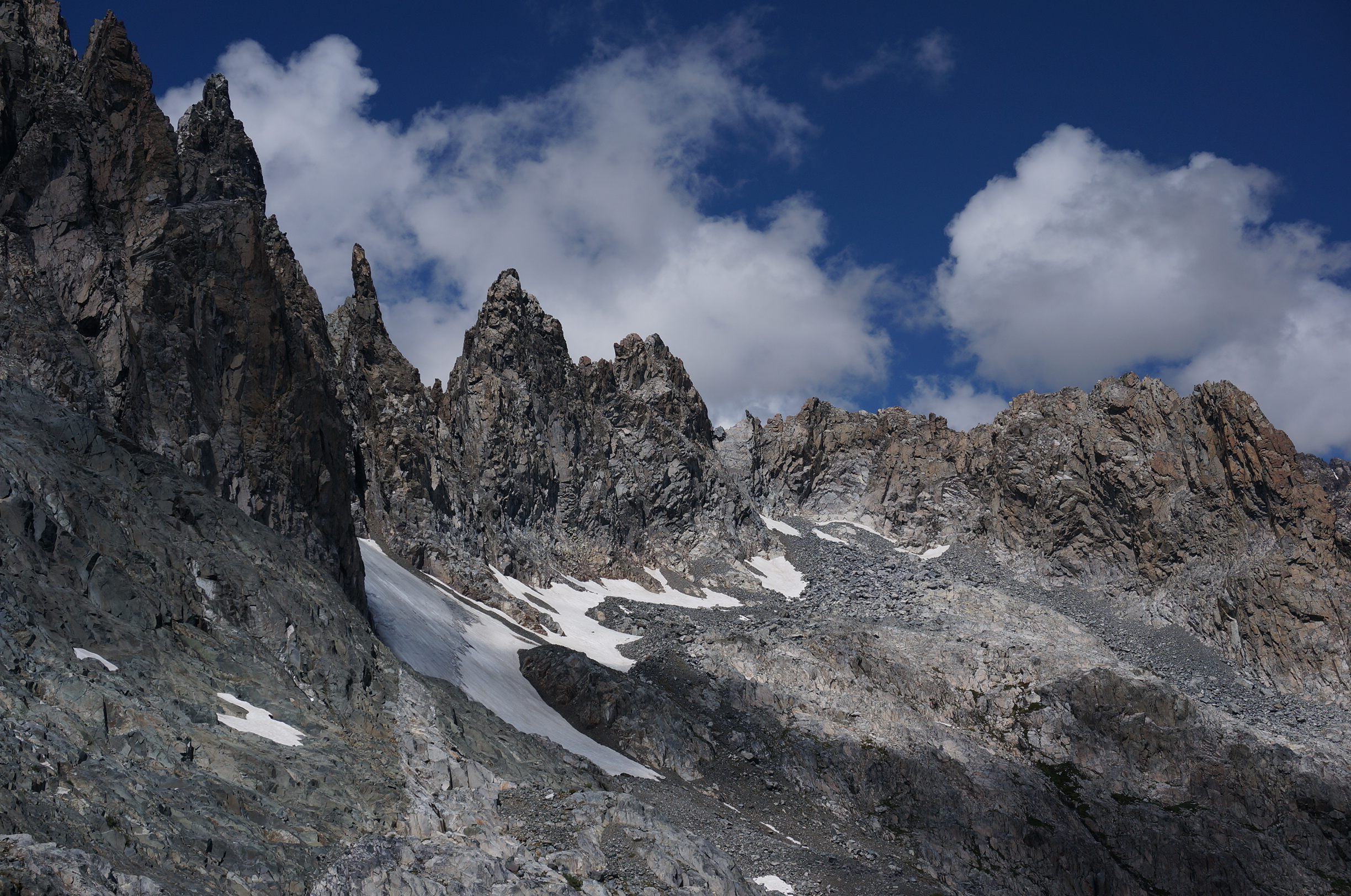 “However badass you think are you are, someone else did it 20 years ago, with higher water, worse gear, and shittier conditions.” – Xavier Engle I had gone backpacking in the shadow of the Minaret Ranges, south of Yosemite and west of Mammoth, twice before.

Both times, I stared for hours at the towering stack of crumbly, spookily dark, metamorphosed caldera, thinking just how cool it would be to get up there.

I’d come at it from the west though – the wrong side of the mountain range.

And coming at it from the east entailed an additional 3 hours of driving.

With some research, I discovered a Class 3 route on the Eastern side: Clyde Minaret.

Other websites invariably described Clyde as a route that went, but that was exposed, very exposed.

One of my kayaking buddies from college, Jake Whitcomb, and I had talked about the best way to adventure during the 2015 California summer with the limitations of its zero snowpack and our old limbs.

Clyde, we reckoned was the best bet.

Jake rode his motorcycle into the dusty parking lot where I lived in the Central Valley as the sun set.

I drove through the night, up near Yosemite, past granite slabs glowing white in the moonlight.

A bear tried to jump out in front of our car, but I swerved around it.

We reached our destination, Agnew Meadows, at 3 AM.

Jake stirred and we repositioned for the night – myself in the way back, Jake stretching his 6’3” frame across the bench backseat.

We tried to sleep for at least 2 hours.

Perhaps we slept for 1.

I don’t remember falling asleep, though the alarm woke us up.

Traveling light, we cruise up to the base of the Minarets –reaching Iceberg Lake, about 11 miles in, within four hours.

I had been thinking about this one lake, and when I might get there, for three years.

Rising quickly and crumbly ahead, the Minarets are tall, dark, and imposing.

Surprisingly, we run into some Asian tourists at the base of our climb.

They look at us and then back to their maps.

“Are you going to Minaret Lakes?”

We mull our beta, hoping it’s this nice all the way through.

I think about how one potential issue with using online postings is that people can overdramatize things to make sure appropriate caution is taken. Maybe that is the case here?

It turns out not to be the case.

We reach the scree and snowfield in about an hour.

The scree is pretty loose – and it’s solidly steep.

We head up slowly, in turns, to avoid the scree falling down on the person below.

It is a tricky operation.

The steepness is consistent, the footing difficult.

I feel fear for the first time of the day.

After maybe 30 minutes, we reach a small saddle – a place to finally take a breath and a pause.

“I’m worried about the downclimb,” I tell Jake.

He is less concerned.

Might as well keep going up, he figures, as we’d have to come back down this stretch at some point.

Jake hands me a half a piece of gum to help me focus on other things.

He turns up and continues to lead – a position I was happy to cede.

After the saddle, the slope becomes too vertical for scree, turning into a wall. We haul ourselves up steep faces to narrow ledges.

Jake probes, I make suggestions on a route when I can see something.

A point comes where Jake is not sure if we could go on.

I see something and I say something.

Jake tells me that I give him reassurance.

There was no space to put down a bag to take out a jacket or camera.

It is very difficult to get comfortable.

Even on the easy moves, we find ourselves clinging to the rock.

Fear pokes at me with a finger.

Clouds begin to build in the early afternoon.

I’ve never been great at dealing with fear.

It feels huge in my chest, as if what was at first a finger now enfolds me.

I do my best not to look down.

But, the walls are so steep that it is impossible not to look down as we seek out foot and hand holds.

My bag bumps a rock and shifts me involuntarily and uexpectedly.

Jake and I encourage each other forward.

We navigate around a fin.

Our beta had said the most challenging moves on the route were 15 minutes after the snowfield.

It is too steep for a snowfield here.

We had passed the original snowfield long ago.

The moves do not ease.

I become cold. I start to shiver.

The combination of fear and cold feels overwhelming.

It invades my mind from all angles.

I have the shakes – but there isn’t enough ledge to take my pack off and grab a jacket.

Eventually, after some time, we find enough room to add layers.

We cling to the rock, and stress, and calm, and take deep, slowing breaths.

And it is still a lot of exposure.

We reach a point where the good holds, the bad holds, the mediocre holds become invisible.

We cannot find the route.

I throw myself into a small cleft for some mental and physical stability.

Jake tries to relocate the route.

The route has been mostly clear.

Now it definitely is not.

The only way that I could see forward was steps over absurd scree and onto nothing.

I look out, onto a magnificent view, rather than down.

The empty air clutches at me, at my bag, trying to pull us down. Jake cannot find much of a route. Stepping on pebbles into open space. With no holds.

We are still not that close to the summit.

Close, but not close enough, I felt.

Is there a close enough?

Jake and I had agreed beforehand that we would only do things that made everyone comfortable.

We take another few minutes, then we downclimb.

Again, it is impossible not to look down.

Now though, rather than the sustained, building fear of the upclimb, the fear spikes like sinusoidal waves.

The best downclimbing is done facing the wall – which is scarier than butt sliding.

At one point, I just don’t know.

And I am hanging. just tensed, locked up, and hanging.

Fear tightens its grip from a spoon to a bearhug

Jake tells me where to go. He puts out a hand to steady my foot.

Finally I can breathe deeply.

I attempt to expel the fear through strong breaths.

A body ice – we submerge ourselves into Iceberg Lake to ease our aching joints.

We walk back the 11 miles from Iceberg and reach the car with the last light.

We drive into town, and still basking in pungent aromas, we attempt to make some new friends at the bar.

One thought on “Clyde Minaret”