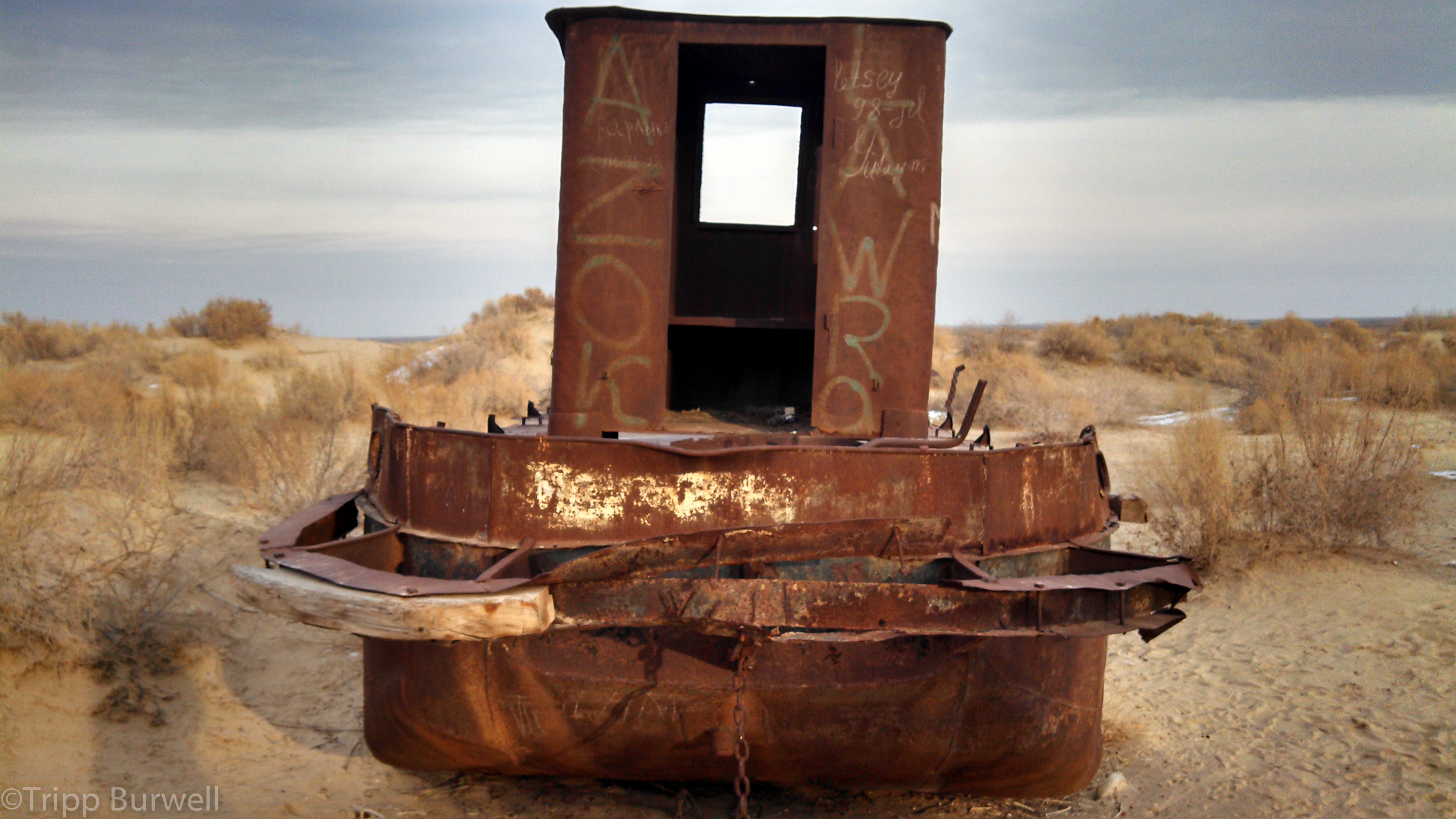 The Aral Sea has been in the news recently, because it continues to shrink.

Plenty of folks are looking for additional reasons to blame Russia for the sea’s disappearance.

Soviet efforts to farm cotton in the Uzbek desert (a compulsory practice for all citizens that continues to this day) obviously led to the decline of the Aral Sea, but I think there’s a more interesting question out there.

What could the Aral Sea teach us as a potential example for future environmental disasters?

In January, 2014, my girlfriend, Kate, came over to visit me in while I was on my Fulbright in Kazakhstan. For those of you out there not in the know, Uzbekistan is THE (only) place to vacation in Central Asia in the winter. Because there’s still only so much to see in Uzbekistan, we planned to visit the Aral Sea, the site of the world’s largest ecological catastrophe (so far).

We stayed in a place called Moynaq, a former port town that is now hours away from the Sea. The town reminded me strongly of some of the most difficult living places I have encountered previously – mainly in the Arctic and across reservations throughout the United States and Canada. Lots of dust. Not a lot of opportunities.

After we arrived in Moynaq taking tea, we drove out to the former edge of the Sea. Our guide (you have to have a guide in Uzbekistan) told us that UNESCO had dragged these ships over to the town so that people could see them and photograph them.

Moynaq is a long way from anywhere these days, though it was once a major commercial hub of western Uzbekistan, the major provider of fish to the rest of the landlocked country. We viewed a number of painted renditions of satellite images which showed the sea constantly shrinking, starting in the early 1960’s and continuing to today. Those images reminded me of similar images that I seen of the Arctic sea ice extent shrinking over a shorter time period.

For the Arctic, climatologists have developed very robust models for understanding sea ice extent. Other experts focus on the coming resource rush to tap new oil sources in the freshly icefree areas.  Most of the reporting on the future of the Arctic has focused on these aspects, as well as how communities might change as a result of the melting Arctic. However, as we struggle to understand the future of the Arctic, a model may also exist to predict its political future – the shrinking of the Aral Sea.

As it has retreated, the former area of the Aral Sea has undergone much of what is now predicted for the Arctic, not only depleted ecosystems and communities, but also the sprouting of drilling sites for gas and oil on newly exposed lakebed.

Furthermore, like the Arctic, the Aral Sea is an international problem – it straddles the border between Uzbekistan and Kazakhstan, its sources are in Tajikistan, Uzbekistan, and Kyrgyzstan, and the actions of the Soviet Central Planning Committee, Uzbekistan, Kazakhstan, Turkmenistan provided the main causes of its decline.

However, after the Aral Sea reached unacceptably low levels, national solutions have been developed to the international problem. Kazakhstan built a dam on its side of the Sea, implented some water conservation measures, and is seeing its portion of the stop its decline and slowly begin its return. Uzbekistan, whether through lack of resources or lack of will, has not. The Uzbek side of the Aral Sea continues to shrink.

As we face an unprecedented international ecological disaster, it’s worth looking at the worst one so far in our history to see what we can learn from it, as well as we cannot. In a paper published in the fall of 2013, Andrew Derocher and others pointed out that “Yet, none of the five nations with jurisdiction over polar bears (Norway, Russia, United States, Canada, and Greenland) has a plan for responding to sudden changes in polar bear populations caused by nutritional stress.”

Of course, the lack of planning extends well beyond polar bears.

We are in a similar situation to the Aral Sea nations, and a plan which acknowledges that could help us begin to deal with the changing nature of Arctic ice cover.

After spending a night in Moynaq, we got up early in the morning to drive out to the Aral Sea from its former port. We drove all morning across crazy landscapes. After reaching the end of the road, we got out for the “viewpoint.” Unfortunately, the Sea had receded too far and it was too cloudy for us to see it.