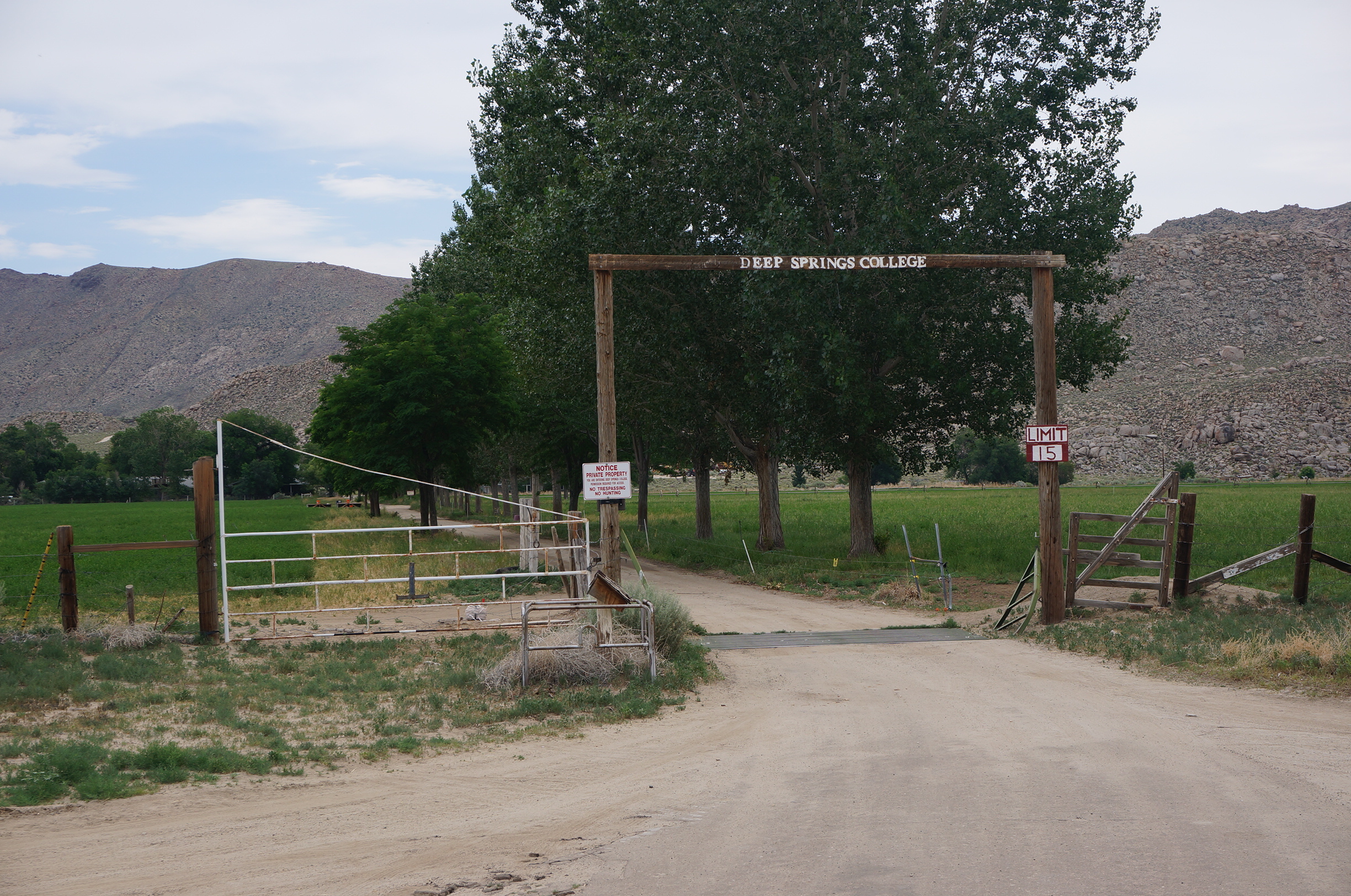 Note: This was the first expository essay I wrote – for a class in high school in the fall of 2004. I’ve left it essentially unchanged, including my awkward remembrances of the dialogue.

The white floor tiles of the bus station in San Francisco looked greasy and un-washed. Gareth closed his eyes in the blue iron mesh chair next to me. He and I had met up earlier that day in the city, each having visited separate friends, and we were planning to arrive at his college, Deep Springs, the next day.

At midnight, we boarded the bus to Reno. Six hours of restless sleep and cramped necks later, we disembarked at another similarly depressing bus station. Then we left for the long leg of the journey.

On our eight-hour trip from Reno to Lida Junction, Nevada, I acquainted myself with the desert. We rode an old charter bus with that funky smell of slow decay, and I watched as the dull collage of brown dirt and green and gray shrubs sprawled out until it rose up on the ridges in the distance.

Even after I became really bored, I watched the sun-beaten landscape slide by the tinted window. About an hour outside of Reno, we stopped at Carson. For another several hours after Carson, we pass through only the towns of Hawthorne and Tonopah. Other than that, there were no buildings, no water, no clouds, nothing to break the monotony or add flavor to the scenery.

Finally, the bus arrived at Lida Junction, a town that consists of a white, one-story brothel with a large billboard advertising it as the Cottontail Ranch. After meeting Lane, another Deep Springs student, and yet one more hour of the grey, green, and brown, we finally arrived in the valley at the oasis of Deep Springs, California.

During my one-week visit, cattle driving dominated the work schedule of the labor-intensive college, and I rode a slow, brown horse named Mouse for four straight ten-hour days. After the fourth day of dust, soreness, yelling, whipping, and mooing, Gareth pulled me aside, “Hey, Tripp. We got a big deal cooking tonight. It’s a full moon, so we’re going over to the dunes. It’s gonna be a blast. We go out to these really big dunes, the second tallest in North America, and run around and then hang out there for a while. It’s over in Eureka Valley, part of the Death Valley National Park, which is a ways off. Lane and Mitch said they wanted to go, so we’ll drive the van.” I had never been to a “really big” dune before, so I had no idea about what to expect.

At about 10:30 that night, we all piled into a white van with three rows of bench seats. Mitch and Lane sprawled out to snooze on the back two, while I rode shotgun talking with Gareth to keep him awake. “We’ll be driving for two hours,” Gareth explained. “But if you thought Deep Springs was in the middle of nowhere, wait until you get out to the dunes.”

At around 11:30, we drove up from the desert into a mountain pass whose walls narrowed so much that the road had only one lane for two directions of traffic. We honked as we meandered the twists of the pass but ran into no one. Around midnight, we turned onto a dirt road. Rumbling along in Eureka Valley, I noticed how the full moon flooded the ground with white, so it was as if we were driving on a huge sheet of paper. About forty minutes later, Gareth parked near some picnic tables and explained another part of the tradition to me with a smile. “These dunes are very sacred to Deep Springs, and it is important that we keep them pure. I am going to strip down now, and encourage you to do the same.”

At the sight of Mitch and Lane taking their clothes off too, I joined the group. Ignoring a wooden “Keep off the Dunes” sign, we carefully picked our way through the thorny white shrubs on the white desert floor.

I looked up ahead; there the dunes stood in all their glory. They rose up 800 feet from where we standing. We trekked on for ten more minutes and reaching the first plateau, felt the cool, hard-packed sand beneath our feet.

We had climbed about 300 feet and still had a long way to go. As we trudged higher, the sand became looser, so that it was more difficult to climb. At the ridgeline, we stopped. Looking down the dune on my right, I noticed a steep slope, dropping about 400 feet very quickly. Bathed in moonlight, it looked a lot like a ski bowl. On my left, the black, shadowy sand gradually trailed off to the plateau, the only ink spot on the paper landscape. We halted at the ridgeline. Surveying beyond the few hills of sand ahead, the cliffs at the edge of the valley appeared in mixture of blacks and whites.

Having made it to the top of the dunes, we reveled started sliding down the slopes, listening to the sand move with a deep grating noise, all trying to make the deepest and loudest sound. Then we began hollering, running, and tumbling down the slopes. Knowing that I would fall safely, I leaned out as far as I could and hurtled forwards until I dove into the sand.

I rolled until the ground leveled out again. Mitch raced me on the next “fall.” I beat him. As we struggled up the steep side of the dune, sinking into the sand, we noticed our roll-marks. Wherever we had rolled, we had left uniform, shallow designs in the sand. We could see where we had come close to each other, and where we had swerved away.

My roll-mark formed a pentagon from my limbs and head with the point of my core body in the middle, while Mitch had rolled in a line of head, body, feet, head, body, feet. Climbing back up, Gareth noted, “It would suck to be out on these dunes under the burning sun. We definitely couldn’t hang out here in the day. The moon makes this whole deal pretty special.”

Mitch and I slid down the slope and walked back up one final time. Mitch said, “Why don’t we just sit down here for a while. I’m really tired from all this running and falling.” We all hid ourselves behind corners on the ridgeline. Gritty sand covering me completely, I glanced back up at the big, white moon, shining on the sand, and felt its peace.

Lying down on the sand, I sank into it a few inches. Warmth from the sun in the day radiated from the sand and put me into a soothing combination of waking and sleeping. I would be staring at the dune bowl, and then I would wake up again, surprised to be looking at it.

Mitch, Lane, Gareth, and I were the only people for miles around, but I could not see anyone. Whenever I woke up, I listened for noises, but I did not hear anything at all. I could not hear any wind, nor any hum of motors, nor even chirping crickets.

The true silence enveloped us all.