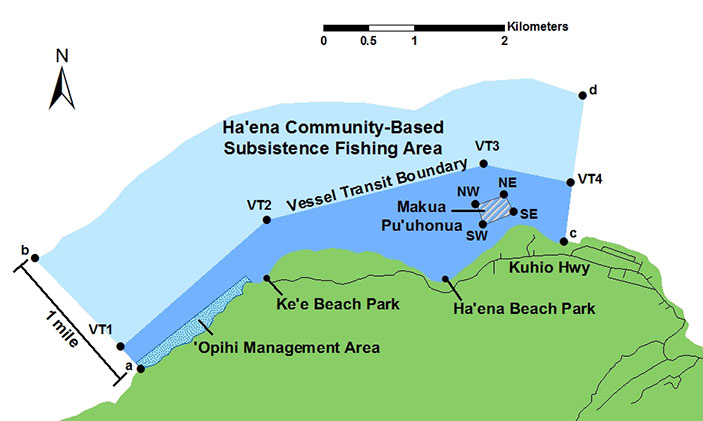 In August 2014 Hawaii Governor David Ige signed into law the first ever Community Based Subsistence Fishing Area (CBSFA) for Hā‘ena, Kauai.  The rule provides the community of Hā‘ena “hui” (group or club) an opportunity to use traditional fisheries management practices to protect its ocean resources. According to Governor Ige “The Haena CBSFA is the result of more than a decade of work, overwhelming support from the local community and strong recognition that government cannot do it alone and community-based management and buy-in is critical to sustaining natural resources now and for future generations “( http://governor.hawaii.gov/newsroom/dlnr-news-release-hawaiis-first-community-fishing-area-signed-into-law-by-governor-ige/)

The Hā‘ena CBSFA includes the waters and submerged lands from the shoreline to a distance of one mile off the northwestern coast of Kaua‘i. Duke students visited with representatives of the Hā‘ena CBSFA to discuss the successes and challenges of this unique initiative. The Hā‘ena community is the first in Hawaii to create local coastal resource management rules based on traditional knowledge and empowers the local community to take on an active role as stewards of their marine resources.

One of the CBSFA hosts, Uncle Tom, demonstrated a traditional fishing technique. Throw nets are the most common gear used by local fishers. Several reef species are food staples for the community including akule, moi, ‘ama’ama, nenue, oama, and kumu. Traditional knowledge of local fishermen includes intimate knowledge of surrounding reefs and frequency and abundance of particular fish species. Traditionally, local fishermen fish only within their own ahupua’a (a traditional Hawaiian section of land typically running from the mountain to the sea), and even at times only on specific reefs. Traditional management techniques to be carried over into the CBSFA include:

Based on the success of the Hā‘ena hui; in order to incorporate current local lifestyle and traditional methods of livelihood into natural resources management, restoration scientists should understand the value of traditional knowledge and ultimately exercise known and future methods of preserving and maintaining these environments. This will help to ensure that local traditions can continue to thrive.