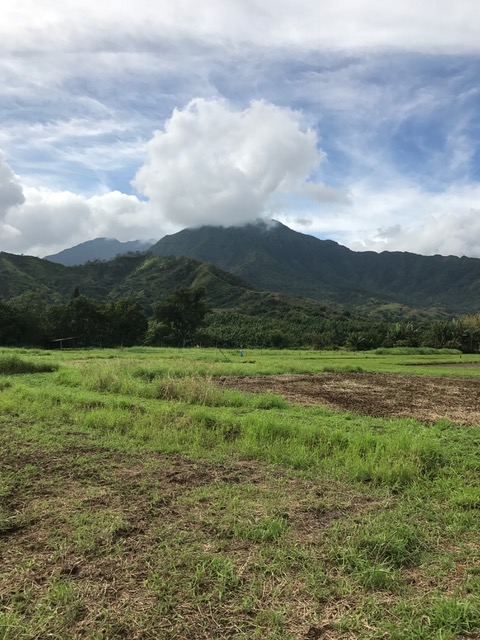 The ahupua’a, as typically defined in the Hawaiian language, is the boundary of a Hawaiian island watershed from the top of a mountain to the sea. The ahupua’a of Waipa covers a boundary of 1,600 acres in the Hanalei Bay area.  The kuleana “responsibility” for the ahupua’a  of Waipa begins with an understanding of the Hawaiian term “malama aina” meaning to take care of the land and natural resources.

Knowledge of malama aina was transferred to the Duke students by Waipa’s Kirstie on a bright sunny Kauai day by learning the native sustainability practices of “kalo” or taro farming. Kirstie began the learning with a discussion on how the broad, heart shaped leaf and nutritious taro plant was viewed as an essential food and sacred plant in Hawaiian culture.  Learning intensified as Kirstie showed the Duke students the complex irrigation system located within the ahupua’a of Waipa that was created by native Hawaiian taro farmers centuries ago.  Kirstie explained how water flows down the mountain via a stream and branches off in multiple directions to rectangular muddy crop areas known as lo’i kalo or taro wetland patches.  The branches in remarkable engineering design allow for water to go to multiple taro wetland patches at different grades and return to the same stream the water came from leaving very little water wasted.

Mystified in legend and engineering, Duke students attention turned to practice as the small group removed an invasive nut grass so the growing taro could thrive in the muddy patch. With shoes off, Duke students lined the rows of the taro patch (as pictured below) and carefully removed the nut grass while watching each step to avoid the sharp invasive apple snail that occasionally appears in the patches.  Both the nut grass and apple snail are two invasive species that add new rigor and challenges to a manual and intensive taro farming process. The Duke students met the challenge and once Kirstie deemed the patch was in an acceptable condition she took the Duke students to another taro patch ready for harvest. For the Duke students, the rigor of invasive species removal was challenging in itself; now came the challenge of removing the taro plant from the earth. As a comparison, imagine picking up a 10 pound bowling ball stuck in 8 inches of mud.  Thankfully Kirstie brought the tools of the trade, a digger bar, and years of experience.  She expertly showed the Duke students how to use the digger bar to loosen the taro roots (both parent and baby off-shoots), allowing for complete taro plant removal.  Once removed, Kirstie explained the many different medicinal and food uses from the taro plant.  An important note to make for those seeking to eat the elephant ear looking plant is do not eat the plant uncooked.  While the taro leaves and other parts of the plant are considered very nutritious, when undercooked, taro leaves especially are considered toxic due to their naturally occurring crystal compounds. As the Duke students finished taro harvesting with Kirstie, the importance of culture and sustainability practices emerged. Kirstie concluded her discussion with a rebirth story of the taro plant, she explained to the Duke students that when taro is harvested, the off-shoots are cut from the parent plant and once the taro leaves and corms are cut off, about a quarter of an inch is left attached to the stem called “huli”.  The huli are flipped upside down and replanted to grow new offspring.  A cycle that has continued for generations and a cycle the Waipa Foundation continues to honor and communicate to others through their community based program.