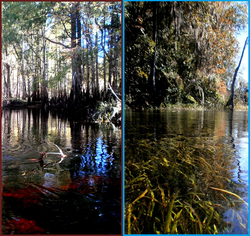 I’ve written a lot about all the steps and hurdles I’ve gone through to get this paper published, but not a word about what the darn thing is actually about. It seems about time to dive in and tell the story of this paper.

My research asked how different concentrations of dissolved organic carbon affects how rivers in northern Florida process nitrogen. Dissolved organic carbon (DOC) is a large collection of different carbon-containing molecules that dissolve in water as vegetation decays. In rivers with a lot of wetlands and swamps in their catchments, the water can have very high concentrations of DOC, composed mainly of large, complex molecules that break down slowly.  Some of these DOC molecules are brown in color, giving the water a tint that looks like very strong tea.  In rivers with such high concentrations of DOC, known as blackwater rivers, light is absorbed as it passes through the water.  This light absorption limits the places where plants can grow to only shallow areas where they can get enough light.

On the other hand are the many spring-fed rivers in Florida.  In these rivers, the water comes directly from the aquifer, and emerges from the ground crystal clear.  This, combined with steady flow rates, allow very dense vegetation to grow throughout the river.  Aquatic plants often leak DOC into the water, but unlike most of the DOC in blackwater rivers, this is composed mostly of simple, small molecules like sugars that are easy for bacteria to use as fuel. In addition to having different concentrations of DOC, rivers differ in the concentrations of nitrate they carry. Nitrate is a form of “fixed nitrogen”, differing from the nitrogen that makes up most of our atmosphere because it available as a nutrient to most plants.  Too much fixed nitrogen in water bodies leads to eutrophication – the proliferation of nuisance algae blooms, and the depletion of oxygen when they decay. Luckily, there are bacteria that can turn nitrate back into atmospheric N2 (which is unavailable to most plants and algae) in the absence of oxygen, and if they have organic matter to use as fuel. This process is called denitrification.

We might expect denitrification rates to be highest in blackwater vs. spring rivers, given the higher concentrations of DOC for bacteria to use as fuel, but we found the opposite to be true. We assume that spring rivers actually have higher rates of denitrification, despite the lower DOC concentrations, because the carbon in these rivers is in smaller, simpler molecules which are easier for bacteria to use.  In blackwater rivers, there is a lot of carbon, but it’s in forms that are too complex for the bacteria to access.

To sum it up, let me leave you with what I like to call “movie tagline” of the research:
“In rivers with more dissolved organic carbon in the water, denitrification is more likely to be carbon limited.”