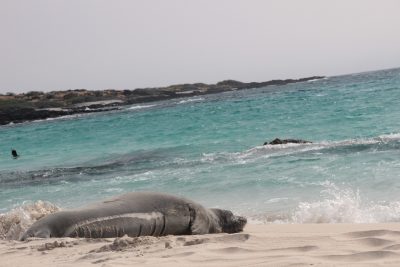 Upon arriving at the dorms just outside of Honolulu, I saw them: cats. Everywhere. Initially, my brain reacted as it would normally, “Aww, cute fluffy animals.” Wrong. They were not local campus pets; they were not pets at all. They were feral cats and just a handful of the half million present on Oahu. These cats have no predators in Hawaii, so there is no limit to their population with abandonment of pets only adding to their population.

The next day I was in for a treat as I already knew how cats could be detrimental to bird populations. Hawaii has many endemic and endangered bird species and cats are clearly not contributing to saving those birds. Even fed cats hunt for fun, and their targets tend to be the local bird populations. At the NOAA offices near Pearl Harbor, we learned about monk seals who had recently died with the cause of death determined to be Toxoplasmosis (toxo).

Now, I have a kid and a housecat. I learned all about how toxo could affect development of a fetus and can even cause pre-term labor or involuntary abortion in humans. What I didn’t know is humans are not the only ones who could be affected by toxo.

Hawaiian monk seals are currently endangered, with fewer than 1,500 left in the wild. In the past few years, multiple deaths have been tied to toxoplasmosis including at least one aborted fetus. According to the veterinarians at NOAA, the lifecycle of Toxoplasmosis is as follows (1) The feline’s stomach is where the toxo-causing parasites reproduce, (2) the eggs are excreted by the cats and finally (3) the eggs are ingested by other creatures, which are subsequently eaten by cats. Here’s the thing: Seals obviously don’t change litter boxes or eat cats, yet they are still exposed to toxo, which has been nicknamed a “zombie parasite.”

This parasite can survive in water for years, can be ingested by fish, and then seals acquire toxo by ingesting the infected fish. The fish are exposed to toxo from water that drains from the mainland to the ocean, washing down all the infected fecal matter into the ocean. Now consider that there are half a million cats on one island, each cat can release thousands of parasites every time they excrete.

Native and endangered birds and monk seals are affected by either this parasite or directly by the cats. Supporters of the cats may lead to the extinction of native animals, just to save the wild and invasive cats that are destroying the native Hawaiian landscape.

Something needs to be done about the feral cats to conserve the natural Hawaiian landscape and the species that live there. Unfortunately, it may take the extinction of a species or an increase in negative effects of toxo on human pregnancies to get any action to start removing cats from the landscape on a statewide level.