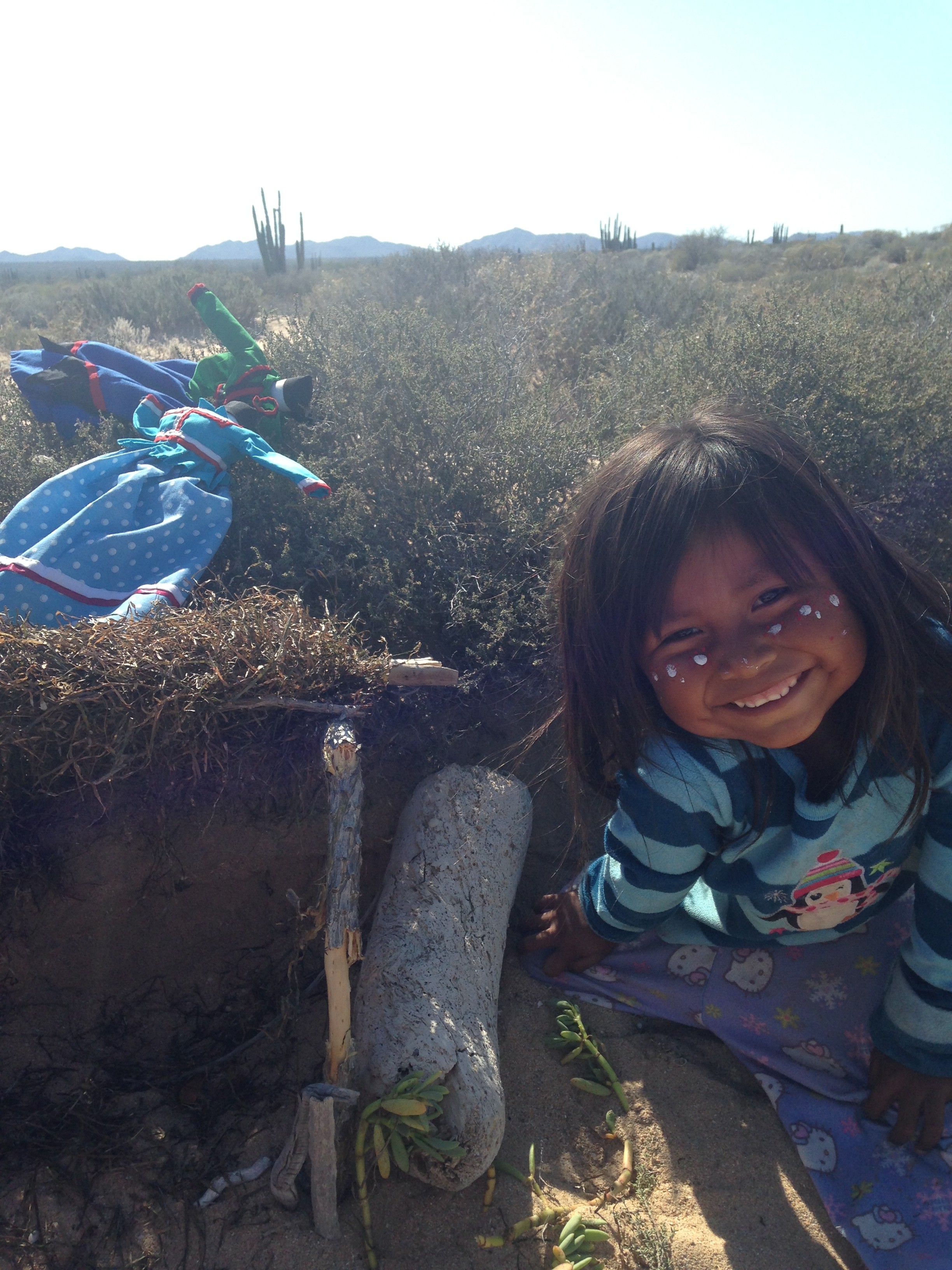 Sometimes, it’s the simplest of interactions that ends up meaning the most to you. For me, that moment happened on our return visit to Tiburón Island with an adorable 4-year-old girl named Gira. Though my Spanish listening skills are rusty, and my conversational abilities are shoddy at best, I was able to connect with Gira — playing, talking, and teasing with her as I do with many of my young cousins. It’s a small moment in a very large trip, but it meant a lot to me. In this, one of our last dispatches from our trip, I hope to tell you a bit more about my new friend Gira, and about our second, and final, trip to Isla Tiburón that took place last Thursday through Saturday.

We had returned to Tiburón to learn more about the Infiernillo Channel, the pen shell fishery, and the Seri and Kino fishermen that comprise that fishery. The pen shell fishery is a small scale fishery that is unique in its management because the most productive fishing grounds occur in Seri territory. As the Seri were granted exclusive marine resource rights to the waters surrounding Tiburón in 1975, they have developed different access control strategies over the years to govern this common property and regulate the exploitation by outsider Kino fishermen. Xavier has been studying the fishery for many years and has written extensively on it — if you’d like to take a crack at a portion of our reading list, I’d suggest you start with his paper from 2012.

Like our previous five-day Tiburón excursion, a number of Comcáac (the auto-ethnonym for the Seri people) joined us for this adventure. Betsabe and Mayra Torres came again — just as eager to learn and experience the island as they’d been the week prior. In addition, many members of the López family, with whom Xavier has worked for many years, came with us. Alfredo López, Xavier’s dear friend and a well-known Comcáac guide who led previous years of this course, sadly passed away in 2014, but two of his sons, one daughter-in-law, four grandchildren, and one great-grandchild (the aforementioned Gira) were able to join us and keep the López family a part of the Gulf of California course.

It was an exciting change in group dynamic to have such a large and young family with us for the two nights we camped along the Infiernillo Channel. Unlike our previous action-packed five days on Tiburón, we had a lot more unscheduled time on this trip, allowing many of us to sit down with the López family and chat freely with them as the afternoon sun slowly waned behind the sharp peaks of the island’s mountain range. It was during our first such afternoon of unscheduled chit-chat that I met Gira.

It’s amazing how easy it can be to make friends with young children. A consistent grin and a few goofy faces can endear you within minutes. Gira took no time at all before she sized up my face, decided I could be a suitable playmate, and tossed me an orange as an invitation to play. We tossed that orange — and many more of them from the bag — back and forth for a solid thirty minutes that afternoon, giggling incessantly and quickly involving any of my classmates that might have also been interested in a game of catch.

Though our verbal communication was limited by my poor Spanish, our playtime came just as easily as it would have without language or cultural barriers. We played with dolls (muñecas, as I learned), built them houses (casitas) made of desert plants, and scoured the beach for shells we could fashion into jewelry rings (anillos). I learned another very valuable language lesson when Gira would not stop repeating the word abejas to me — it means ‘bees’ and there were quite a lot of them taking an interest in my shirt as we played by the dollhouse. I’m quite grateful for that warning!

Though Gira, her grandparents, and her aunts had to leave us on our second day to attend a baptism back in Punta Chueca (one of two main Seri settlements in their territory on the mainland), it was not the last time I saw her. She and her grandmother, Rosa, found us back in Punta Chueca when we too returned to the mainland the following day and were visiting the Seri Women’s Artisans Cooperative. Gira, charming as ever, announced herself before her small figure could be seen, gleefully shouting the name of one of my fellow classmates — “BETSY!”