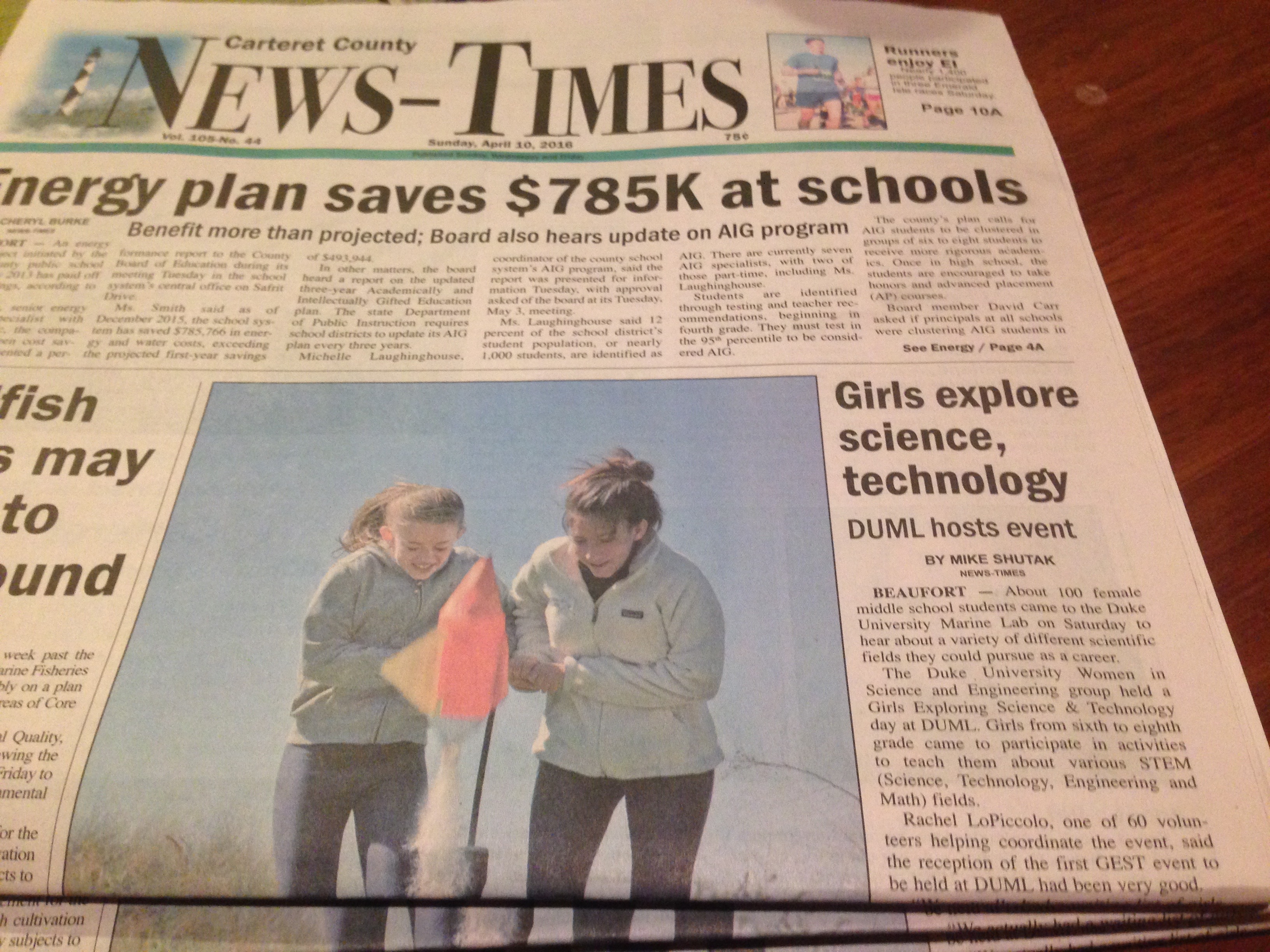 On April 10, 2016, I dropped three quarters into The Carteret County News-Times paper stand on Front Street, smiling at the front page photo and story visible through the clear pane. It was the day after the very first Girls Exploring Science & Technology (GEST) event at the Duke Marine Lab, and I wanted to save this physical story that encapsulated a moment many of us worked hard to organize.

Buying the paper allowed me to skim through other articles that aren’t freely available online. An editorial piece caught my attention with the topic of climate change. I became deflated yet also enflamed in outrage as I read through the op-ed which claimed climate change was a “huge hoax.” Climate change is not an opinion to believe in, but a quantifiable pattern backed by scientific evidence. How could the News-Times print this when their front page story celebrated forward progress for females in STEM and praised energy conservation in local schools?

And more recently, the same column printed an editorial in which the writer praised President Trump’s decision to exit the Paris climate agreement.

I didn’t believe I was qualified to be that someone, in regards to both my newspaper writing experience (zero) and the fact that I was not a climate scientist. That someone would also need to carve time from their schedule to pull the letter together, time that I had prioritized for other tasks and responsibilities.

Writing a letter to the editor is one of the most efficient ways of reaching large audiences. The Carteret County News-Times has an approximate readership of 20,000 people, much more than we could otherwise communicate with via outreach efforts.

Readers also include members of local government, who we especially want to reach. Frequent letters about a certain topic will convey that a sizable group of people care about it.

A letter to the editor is a very short piece of writing, meaning that you don’t need to invest an inordinate amount of time in it. Shoot for less than 200 words.

Tips for Writing a Letter to the Editor

Being new to this myself, I’ve summarized tips I learned from other websites, which are linked in the text below.

For Marine Lab residents, The Carteret County News-Times is available at our campus library if you want to get a sense of the length and format of letters they publish.

If writing alone seems overwhelming, assemble a group. Brainstorm some topics together and compile the facts. Edit each others’ letters and provide encouragement.

How to Submit a Letter to the Editor

Check the newspaper’s website for submission instructions. Below are instructions for Beaufort and Durham residents’ local papers.

Will you join me in my goal to write a letter to the editor? If yes, feel free to share in the comments below what topic you plan to write about.