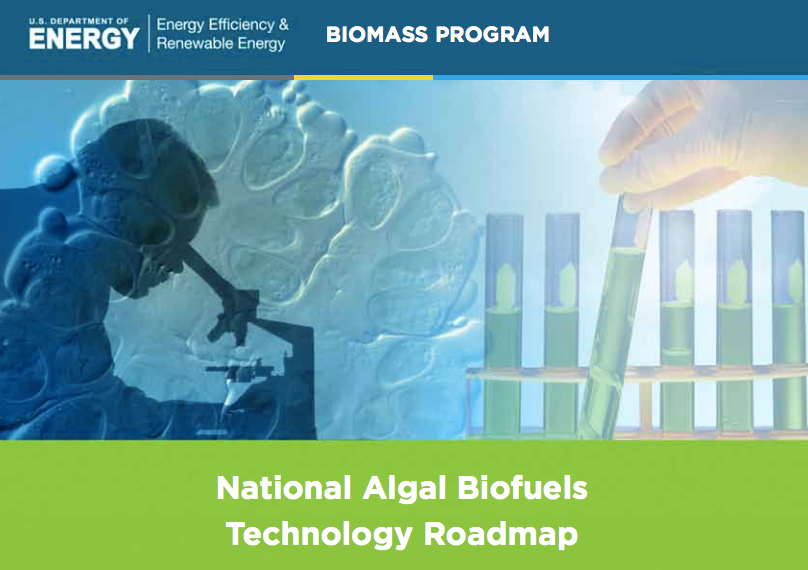 The first edition, all 140 pages, was published in 2010. I found it while searching online and took to reading it while eating my cereal and banana in the sticky summer mornings of 2012. I was working in a lab at the time, trying to decide what to do after college the following year. This text was part of my decision-making process. No, it wasn’t the Hunger Games. It was the “National Algal Biofuels Technology Roadmap,” published by the US Department of Energy (DOE). It outlined the current state of algae biofuel research, knowledge gained from past research, and the numerous challenges in producing algal biofuels commercially. It was intended to lead researchers, engineers, and policymakers in the right direction towards the DOE’s goal of producing “affordable, scalable, and sustainable algal-based fuels.” The DOE had renewed its funding to algae biofuels research, which had previously been cut off in 1996, as part of the nation’s larger effort to facilitate renewable energy production.

I was especially drawn to one of the challenges: “extraction approaches,” referring to extraction of biofuel ingredients, like fats, from algae. One of these ‘approaches’ was secretion, in which algae secrete the desired products directly into the water they grow in. Then, the product could be skimmed directly from the water, reducing the frequency and thus costs of algae harvesting. As a top contender, the alga named Botryococcus braunii is known for secreting hydrocarbons (fuel precursors). Some challenges the document listed, though, is that having delicious carbon sources in the water might make it more likely to become overgrown with bacteria instead of the desired algae.

Along the same line, I gained a broader understanding of other contaminants in algae ponds, such as “weeds,” or other kinds of algae that take over but have less desirable qualities for making biofuels. On the other hand, though, there was recently published research showing that growing multiple different types of algae together could actually increase productivity (for example, Stockenreiter et al 2012), following logic based on ecological theories of biodiversity. The pairing of bioenergy research with algae biology and ecology reeled me in and I composed graduate school applications related to these topics of hydrocarbon secretion and algae ecology.

As time wore on and I continued citing the National Algal Biofuels Technology Roadmap in my writing, the 2010 publication date starting sounding outdated for a text that was supposed to tell us the current challenges facing algae biofuel production. Wasn’t it time for an update?

Indeed, the DOE had been working on an updated version. The next edition, the 2016 National Algal Biofuel Technology Review, appeared online this June. I greeted it as I imagine some might have greeted the seventh Harry Potter book during a midnight release at Barnes and Noble.

As is typical in graduate school, my project is somewhat different from the one I initially proposed four years ago. I am currently researching how well algae can grow in recycled water — that is, water that was previously used to grow algae. Recycling water saves costs of pumping in new water, adding nutrients, and treating the discharged water. However, leftover compounds such as those excreted by algae and bacteria would be leftover in the medium and could affect algae growth.

However, the 2016 edition states some of the same comments as the 2010 edition: “Water recycling is essential, but the amount that can be recycled depends on the algae strain, water, process, and location.” (pg 70 of 2016 edition and pg 34 of 2010 edition). Both state that further studies on water recycling are warranted to “maximize recycle [volume] … while effectively managing the accumulation of salt and other inhibitors.” Text recycling aside, the fact that the 2016 National Algal Biofuel Technology Review does not have much to update regarding these comments from 2010 suggests there is still a lot more to figure out.

Dozens of scientific papers have been published on some aspect of this topic within the past six years. The company Sapphire Energy has even successfully recycled their cultivation water at a demonstration facility (White and Ryan, 2015). Yet, recycling water without treatment on a large-scale is still under current research to make it a more widespread, feasible practice. My aim is to contribute to that body of research, aiding in forward progress towards economical algae cultivation for biofuel production.