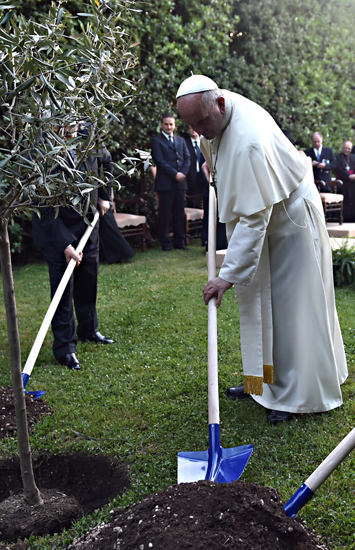 The excitement is building: for the first time in history, the Pope is issuing an encyclical on the environment… but wait, why is this important? 1. The Pope presides over the largest religious body with a single human head: Catholicism. He is influential.

2. The encyclical is the second most important document the Pope can issue and is the first of its kind to address environmental issues. The letter is a significant event.

However, influence + significant event has an uncertain outcome.

My Twitter companions @CatholicEcology @CatholicClimate and @CathClimateMvmt are certainly counting down the days till its issue and are responding to Pope Francis’ prayer intention for this month, intending “that people may learn to respect creation and care for it as a gift of God” which supports the push to recognize April as Care for Creation Month (here).

The speculation is that the encyclical will be issued this summer.

This Wednesday (April 8th) some of my intellectual elders, Mary Evelyn Tucker and John Grimm, who convene Yale University’s Joint-Degree in (and an associated forum of) Religion and Ecology will be holding a panel to explore the relevance of this encyclical.

Watch their overview of the importance of this encyclical here where John Grimm calls the encyclical a “game changer” and points toward its effect on behavior change.

This panel is titled:
“Pope Francis and the Environment: Why His New Climate Encyclical Matters”

In the overview video here, Mary Evelyn Tucker suggests that this encyclical will impact scientists and policy makers as well as people of faith. As one who is currently pursuing degrees in Duke’s Divinity School and Nicholas School of the Environment, and who has been influenced by the work of Mary Evelyn Tucker and John Grimm, I certainly appreciate the Pope’s focus on ecology/environment/climate and agree that a ethical/moral vision must run parallel to scientific understanding. Indeed, I believe science should be both informed and guided by such a vision.

It turns out that science has always been a product of a time and place and certain people’s interactions therein. This finding has nulled the absolute objectivity of science and the scientist. In many ways this finding has already permeated throughout the university system. However, I attest that the ramifications of fully appreciating the integration of subjective and objective viewpoints within historically-flavored, institutionally-structured worldviews is complex. Further, the epistemological consequences of this finding are inconvenient for a disciplined world.

This finding has led the university to a sluggish need to acknowledge, and be conversant with, what has previously been happily located within the domains of other disciplines. This is a huge endeavor given, for instance, the present gulf between humanities and science classrooms. While this gulf may have been bridged conceptually in many academic settings, it is more difficult to bridge this gap and build collaborations in practice.

The inconvenience and uncertainty in collaborative and interdisciplinary practice is manifest in our environmental predicament which continually proves to be all but environmental. This gulf has been associated with an institutionally-embedded immaterial/material split that creates artificially separate spheres relegated to religion and science respectively. This general problem has been treated in different ways– historical, philosophical, etc. The split is characterized as a problem in that religion is rendered impotent and science amoral. Or generally in that thought has lost its referent in action and action has voided thought. However, without delving into the literature, it is apparent that religious leaders are often ill-equipped to communicate science or garner action and scientists are often ill-equipped to communicate values or to understand the social and cultural ramifications of their work.

Into this gulf, the Pope’s encyclical will be delivered. And this is timely work given the framing of international policy with the upcoming UN Climate Change Conference.

The Pontifical Pundit should indeed now step into the bully pulpit to sound an alarm on the pressing sustainability issues we face and perhaps by doing so we can more fully come to terms with the interrelation of social, economic, ecological issues.

Perhaps systemic oppressions and other structural dysfunctions will come to the fore over the minutia we often concern ourselves with. Perhaps we can begin to feel vulnerable enough to admit the limits of our knowledge and knowledge itself for addressing a problem which is as fully human as we are or fail to be.

A promising update comes from a March 30, 2015 international meeting of 17 Anglican Bishops who issued a declaratory report, titled “The World Is Our Host: A Call to Urgent Action for Climate Justice.” Interfaith Power and Light recaps what I see as the promising aspect here, being a call to specific action as informed by their faith and larger ethical commitments:

I will certainly be listening to what the Pope has to say. Will there be a response in Paris?