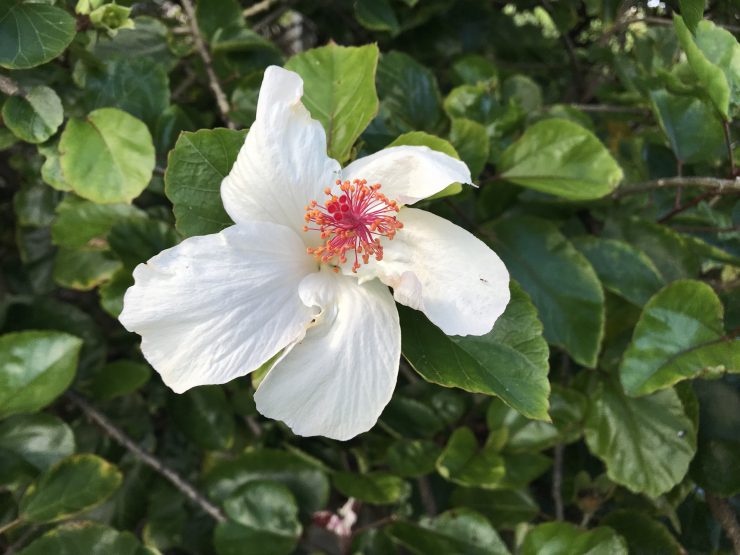 Kaua’i is unlike any other place I’ve ever known. The oldest of the Hawaiian islands, Kaua’i was formed by the passing of the Pacific plate over a hotspot of rising magma. Despite centuries of invasion by foreign plant, animal and fungi species, Kaua’i is still home to an incredible variety of geological wonders, endemic inhabitants and mesmerizing ecosystems, including wet shrubland, montane bogs, grasslands, lowland and mesic forest, and rainforest. Known as the Garden Isle, Kaua’i is a kaleidoscope of spectacular landscapes—a true fairytale for sightseers and nature lovers. Rising up from the middle of the island to a height of 5,066 feet, Mount Wai’ale’ale is the second wettest spot in the world, and experiences up to 360 days of rain a year. Regular rainfall at the higher elevations throughout Kaua’i have (in many places) formed deep fissures in the sides of the mountains. Looking up at the grand faces of Kauai’s peaks, you can make out waterfalls streaming down their sides towards the sea like silvery ribbons. In the south, the Waimea Canyon stuns visitors with its array of rainbow colors, deep, slopping gorge, winding river and stunning Waipoo falls. To the west, visitors can hike the Kalalau trail, skirting high up and along the mesmerizing sea cliffs of the Na Pali Coast, a wild strip of land home to hanging valleys, seaside caves and waterfalls. When most people travel to Kaua’i, they’re looking for the paradise I’ve just described—a place in which vast stretches of undeveloped land still exist, where nature still rules, and adventure can always be found. Visitors are drawn to hidden trails, big surf, lava tubes, Hawaiian legends and honey-colored beaches.

A Threat to Paradise

The last thing visitors expect to see on Kaua’i are GMO testing sites.

And yet, vast swaths of the southern part of Kaua’i are becoming just that: open-aired laboratories for biotech companies, including Syngenta, DuPont, BASF and Agrigenetics Inc.

Replacing sugar cane and pineapple plantations, many of the world’s largest agrotech companies, including Monsanto, have moved their research and development operations to the Hawaiian islands. Conducting open-aired experiments and chemical sprays, many of these companies are now threatening both the local ecology and the health of Hawaiian inhabitants.

Agrotech companies have gravitated to the islands because they can work under lenient U.S. regulations regarding GMO production and chemical application. A year-round growing season on the islands also allows the companies to rotate through 3-4 harvests a year, meaning they can test, tinker and develop new GMO crops and chemical mixtures more quickly than they can on the mainland. Following decades of economic decline in the sugar cane industry, Hawaii has the largest number of experimental biotech crop trials in the country today.[1] Unfortunately, the takeover by large chemical and agrotech companies has hampered Hawaii’s attempt at greater food sovereignty. Few of the GMO crops being grown (especially corn, soy and canola) are edible, designed instead for animal feed and oil production. Although Hawaii enjoys an abundance of favorable weather days and rich farmland, the state still imports 90% of its food. In fact, in many ways the local food system on the islands has actually deteriorated over the years. For example, up until 1984 Hawaii was self-sufficient in milk production. By 2008, nearly all local dairies had gone extinct.[2]

According to the Department of Business, Economic Development, & Tourism (in a report completed in cooperation with the Department of Agriculture), replacing just 10% of Hawaii’s current food imports with local products would keep $313 million dollars in the state.[3] The Health Impacts of AgroTech Companies

Sitting on old plantations and government land, biotech companies have stoked the ire of many island inhabitants primarily for a different reason, however: their unrelenting spraying of poisonous chemicals.

Between 2007 and 2012, the Hawaii Center for Food Safety recorded that DuPont-Pioneer alone sprayed fields in Kaua’i with 90 different chemical formulations, including 63 active ingredients. The company sprayed between 8 and 16 times a day for two-thirds of the year.[4]

Between December 2013 and July 2015, a task force organized by the Kauai County Mayor and State Department of Agriculture found that agrotech companies had sprayed 18 tons of acutely toxic “restricted-use” pesticides on Kauai. Of these chemicals, six are suspected endocrine disruptors, four are probable carcinogens and seven have been linked to neurological problems, brain damage as well as lung, heart, kidney, adrenal gland, muscle, spleen and liver abnormalities.[5]

The same scientific task force found that in addition to restricted-use pesticides, companies also used up to 75 “general use” pesticides, including glyphosate and 2,4-D, labeled probable and possible carcinogens respectively by the World Health Organization.[6],[7]

In Kaua’i, schools in Waimea have been closed due to chemical drift from neighboring fields. When the State Department of Health tested streams in Kauai, it reported that dangerous levels of both atrazine and glyphosate were found in the water.[8] Chlorpyrifos, a restricted-use pesticide and known neurotoxin, was found in samples of the air taken at Waimea Canyon Middle School.[9] Within the timeframe of just over a year (from December 2013 to January 2014), Syngenta, DuPont Pioneer, Dow AgroSciences and BASF Plant Science had utilized over 515 pounds of pesticides containing chlorpyrifos on the island.[10]

Students at Waimea Canyon Middle School have complained of dizziness, nausea and even vomiting. When 60 kids were sent to the Waimea school health room on Jan. 25, 2008, complaining of dizziness and reporting they’d smelled something strange in the air, a plant known as “stinkweed” was blamed for causing the event.[11] Teacher Wendy Tannery, a physical education teacher has said publicly that she is familiar with the odor of stinkweed, and that that was not what she smelled in the air that day.[12] A Sygenta GMO test site lies just 300 feet away from the school’s athletic fields.[13]

Special Education teacher Howard Hust has been present for two school evacuations due to chemical drift from nearby testing fields. He described the experiences to Guardian reporter Christopher Pala, explaining “your eyes and lungs hurt, you feel dizzy and nauseous. It’s awful.” Mr. Hust reported that 10% of students in Waimea receive special-ed services, compared to a state average of 6.3%.[14] Doctors and nurses have stepped into the fray as well, complaining that it’s difficult to treat patients appropriately if they have no idea what chemicals their constituents are being exposed to. Many submitted written support for the passage of Ordinance 960, a law (eventually overturned by the state) that would have required biotech companies to establish buffer zones around schools, hospitals and other sensitive areas, and to publicize the type of pesticides being used on their fields. Doctors on Kaua’i have reported a higher than normal occurrence of miscarriages in the area, and “noticeable aberrations in certain birth defects incidences,” including ten times the national rate of major cardiac defects.[15] In the past several years, Hawai’i Island, Kauai, and Maui voters have passed county laws regulating GMO production and the use of pesticide sprays. Maui voters banned the cultivation and testing of genetically-modified crops in 2014, Hawai’i Island passed an ordinance banning all GMOs save papayas in 2013, and (also in 2013) Kauai ratified Bill 2491, which included pesticide disclosure requirements and made mandatory the creation of buffer zones around GE testing sites

In 2016, however, Federal Judge Consuelo M. Callahan ruled that these regulations were preempted by state law, and prohibited counties from enacting bans or regulations on genetically modified crops and pesticides. In fact, according to a lower court decision, Hawaii counties are not allowed to pass legislation that deals with agricultural issues.[17] Judge Callahan’s decision has been a huge setback for anti-GMO activists and local communities, nullifying all of the islands’ legislative accomplishments.

Of course, the fight is far from over. On Jan. 30, 2017, the Senate Agriculture and Environment Committee approved two measures providing stricter standards around GMO production and spraying. One bill would require statewide standards for acceptable long-term, low-level exposure to pesticides, and mandate the creation of buffer zones. Another bill would provide potentially $3 million in funding for implementing the safety measures recommended by a report published on pesticide use in Kaua’i, a report that found elevated levels of ADHD, diabetes and renal disease among residents living on West Kaua’i (those living in closest proximity to the GMO testing fields).

What Can We Do?

The GMO battle in Hawaii demonstrates that determining the true health and safety of food requires investigating not only the impact of ingesting it, but also looking at how it’s been created, cultivated, and produced. The proliferation of GMO plants has gone hand in hand with dramatically increased rates of harmful pesticide and herbicide use. As GMO crops have been pushed on agricultural areas, crop diversity has decreased, and farmers have increasingly found themselves ensnared in long-term contracts with seed companies, forced to pay licensing fees, banned from giving seed to researchers, and threatened by patent infringement if they should save seed.[18] As “superweeds” and pesticide-resistant pests evolve in their chemically doused, monoculture fields, newer and more lethal pesticides and herbicides continue to be employed, with destructive consequences for both human and environmental health. In a political environment that appears unconducive to environmental legislation, its up to the American people to change industry practices and product through our purchasing power. In short, if we are going to stop the proliferation of GMO foods (and more importantly, the thousands of tons of chemicals that have come with them), then we have to stop supporting GMO products with our wallet.

Whenever possible, buy food labeled USDA Organic, and/or Non-GMO Project Verified. Don’t buy meat that comes from animals fed GMO products, but instead opt for pasture-raised and organic products from animals that have been grass-fed and grass finished. Go to farmers’ markets and participate in CSAs with local, organic farmers who plant a diversity of crops and use regenerative farming practices. Grow your own food and share with you neighbors! Spread the word that a healthy world and a healthy society begins with healthy land and soil.

We can restore Kaua’i and all our treasured places by choosing food that reflects our values. We can return food sovereignty to the hands of people, and commit to building a system that won’t just take care of us today, but for thousands of generations in the future.