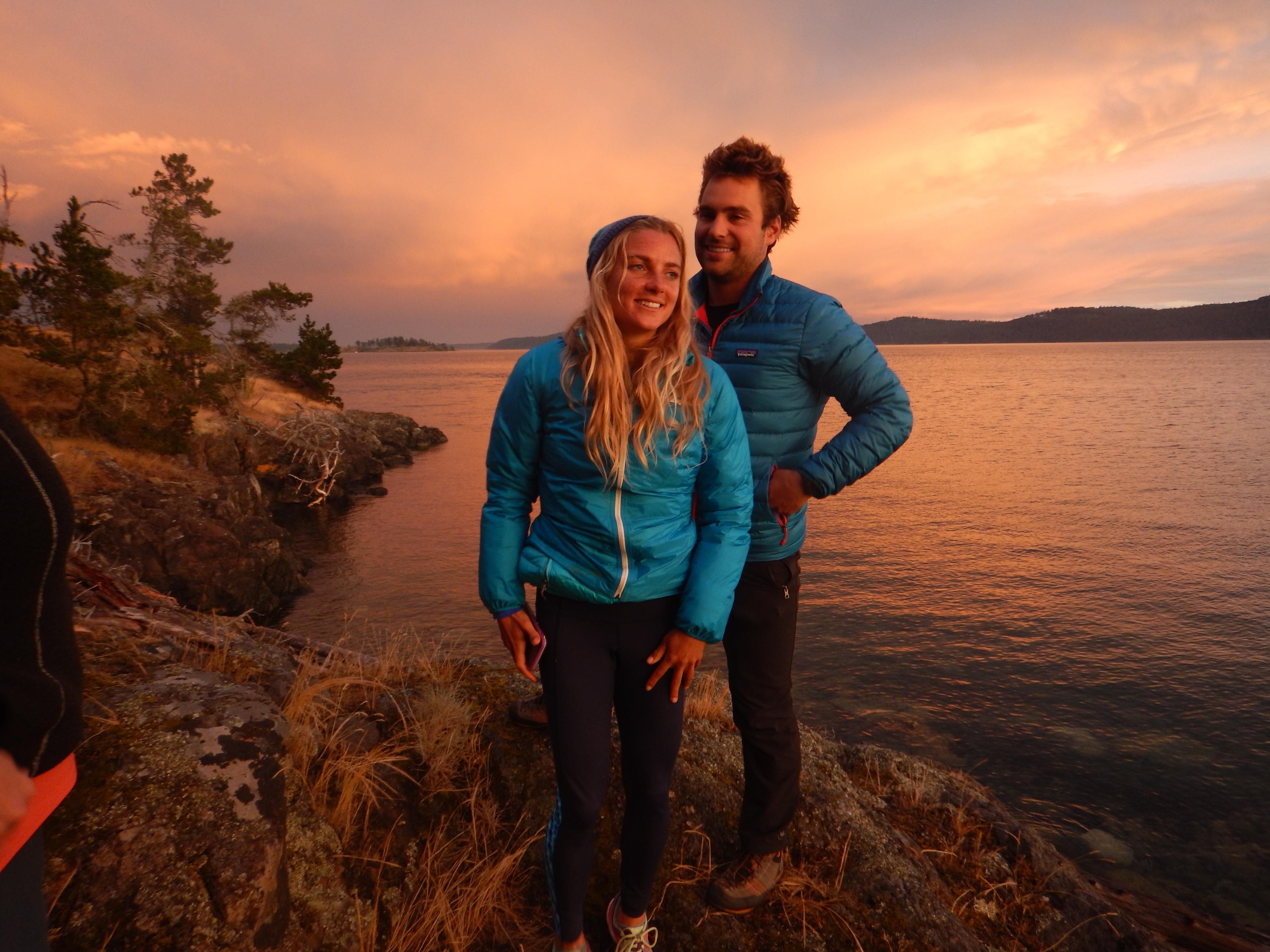 Heading out of San Francisco, my boyfriend and I met my parents in Washington state for a five-day sea kayaking trip in the San Juan Islands. We’d been hoping to meet them up there in our rig (we’re road-tripping up the West Coast this summer), but our trip had been delayed in starting. So, leaving our vehicle at my uncle’s in Sonoma (CA), we resigned ourselves to getting to Seattle by air. We had never traveled to the Pacific Northwest before, and it was exciting to finally explore the region and get a taste of what we have to look forward to in the next couple of months. In short, the San Juan Islands area was mesmerizing, We spent mornings and middays kayaking through passageways, obeying the tides and following currents as the cold, blue sea flow between small, forested islands. Waves brushed up on rocky shores, and red-barked Pacific Madrone trees teetered over cliff edges above harbor seal rookeries.

Amongst the Douglas firs and Gray Oaks, the ruddy color of the Pacific Madrone trees seemed particularly startling, shining out dramatically against the gray rocks and dark pine needles. On long evening hikes around the islands, I stopped a few times to rub my hands along their silky smooth trunks. The trees were beginning to shed their outer layers in curled strips, revealing a beautiful lime green sub-layer. The Madrone trees, important habitat for birds and other woodland species, are unfortunately declining within much of their historic range due to a recent increase in human development. New houses, towns, and farms have necessitated the clearing of trees, and led to increased fire suppression along the coast. Unfortunately, adult trees depend on the occasional wildfire to reduce the conifer overstory, allowing them access to sunlight and signaling scattered seeds to sprout. As the San Juan Islands and other coastal areas have become increasingly populated and fire control has increased, the natural succession processes that many species depend on in the area have largely been eliminated.

As I hiked up and down island hills, I became acquainted too with another tree: the western red cedar. This beautiful, towering tree has been revered for hundreds, if not thousands of years by the Salish Peoples, the area’s native people. Salish Legend explains that the first cedar grew from the body of a generous man, who gave the people everything they needed Resistant to rot, cedar has been used traditionally by the people for everything from canoes to planks for housing. Every piece of the tree is valuable, its branches stripped and used for twine and fishing line, and its bark separated and fluffed into bedding for babies. We ourselves were thankful night after night for the tree—relying on a few strips of its bark to start our small campfires each night due to its remarkable ability to stay dry even after severe rainstorms.

Besides the flora, the fauna in the San Juan Islands was also breathtakingly beautiful. Harbor seals popped their heads out of the water to investigate our tiny armada as we paddled by. We caught one individual doing its best to swallow an octopus tentacle whole, and passed by rookeries filled with animals warming up after many cold hours in the sea.

We were pleased to count 18 purple starfish clinging in lumpy mounds to the rocks along the shore on our first day on the water. Unfortunately, for the rest of the trip we saw very few. Veracious tide pool predators, purple starfish are considered a local keystone species in the San Juan Islands, their appetites keeping other rock-dwelling species from overwhelming the limited intertidal space. I was excited too to spy a few spectacular blood stars as well—bright orange and thin-limbed, they were found on several occasions hiding just below the tide zone.

Starfish sightings were important, as the starfish in the San Juan Islands area have been almost entirely wiped out by a wasting disease made worse by warming sea temperatures. Only now do these important species appear to be making a slow recovery. If these local populations recover, they will be among the lucky ones, as populations further south in California and other areas along the West Coast (areas with even warmer waters) have been almost entirely wiped out. Most famously, the San Juan Islands are also home to three resident orca whale pods, identified as the J, K, and L pods. Although we never saw any of the whales while kayaking, much of the tourism in the area centers around whale watching.

Sadly, although the pods have lived in the area for thousands of years, their continued survival is uncertain, and the Southern Resident Killer Whales were listed as endangered in 2005. The whales of the J, K, and L pods eat only salmon, and speak a different language than the so-called “transient” pods, which (unlike the resident pods) readily attack and eat the local seals and sea lions, and don’t generally stay in the area long-term. In fact, we now know that the J, K, and L pods have a diet, range, social behaviors, and language system totally distinct from all other orca populations in the Pacific Northwest.

From 1965-1975, 45 whales were captured for marine park exhibition purposes, with an additional 14 whales killed in the process. The capturers  claimed that their haul was sustainable, and that they were simply taking whales that were free to migrate through the area. However, after Ken Balcomb, Michael Bigg, and Graeme Elis developed a way to identify individual whales using their unique dorsal fin shapes and saddle-patch patterns, over a series of years they were able to prove that the whales were not only endemic to the area, but they were also steadily decreasing in number (with roughly only 70 remaining). Aquariums and hired groups were banned from taking any more of the animals, and the Marine Mammal Protection Act further helped to protect the animals.

Unfortunately, the whales still face significant challenges, including food scarcity, water pollution, and boat noise. The whales depend on the area’s salmon, particularly Chinook, as their food source. Sadly, many of the area’s salmon runs are threatened or endangered, destroyed by habitat loss, pollution, climate change, overfishing, salmon farming, and dams. To make matters worse, hundreds of boats with noisy propellers pass through the Salish Sea, at times surrounding the whales and likely interfering with their echolocation.

Finally, the resident killer whales are some of the most toxic marine mammals in the world, suffering from the Salish Sea’s high levels of PCBs, DDT, and flame retardants (PBDEs). These particular chemicals build up in the food chain, causing serious health problems for the whales.

Although people are beginning to pay attention and take steps to try to save the local pods, such as restricting salmon fishing and urging people to stop using toxic home chemical products, only time will tell if this unique population will make it back to their historic number of individuals.

Thankfully, marine reserve areas, protected privately-owned areas, and State Parks do continue to help preserve some of the natural environment in the area, despite increasing boat traffic and home construction. On one of our last days touring the islands, we spent a few hours hiking around Yellow Island, a small island (11 acres) owned and preserved by the Nature Conservancy. I’m happy to report that the island is stunningly beautiful, and one of the most biodiverse in the area—home to every species of native flora. The absence of historic grazing has helped to preserve the island’s amazing diversity, and largely spared the island from the influx of invasive species suffered by surrounding islands. Originally a 1947 homestead site cared for by the late Tib and Lew Dodd, the island is now monitored by a caretaker by the name of Phil, who lives on the island regularly working to preserve the island’s fragile ecosystem (removing invasive species, setting off periodic burns, etc.).

As we walked back down to the rocky beach to retrieve our kayaks, we stopped to examine bull kelp, rockweed, Turkish towel, and green algae—all edible species utilized by the local Salish peoples. Turkish towel can be made into a thick pudding, and while green algae quickly becomes a great sun-dried snack! Pulling the kayaks up on shore the next morning on San Juan Island and catching the ferry to the mainland, we left this remarkable area with incredible sadness. I’m still missing its cool mornings and misty evenings, and am so excited to go back, hopefully this time engaged with the Whale Research Center or another important environmental group working on preserving the island’s amazing wildlife. The San Juan Islands are truly jewels of the sea, and in great need of continued preservation and environmental advocacy. I’m grateful for such a precious week on the sea to remind me how vast and yet endangered our oceanic worlds are…there is so much beauty in need of people who care to give them a voice in this world.