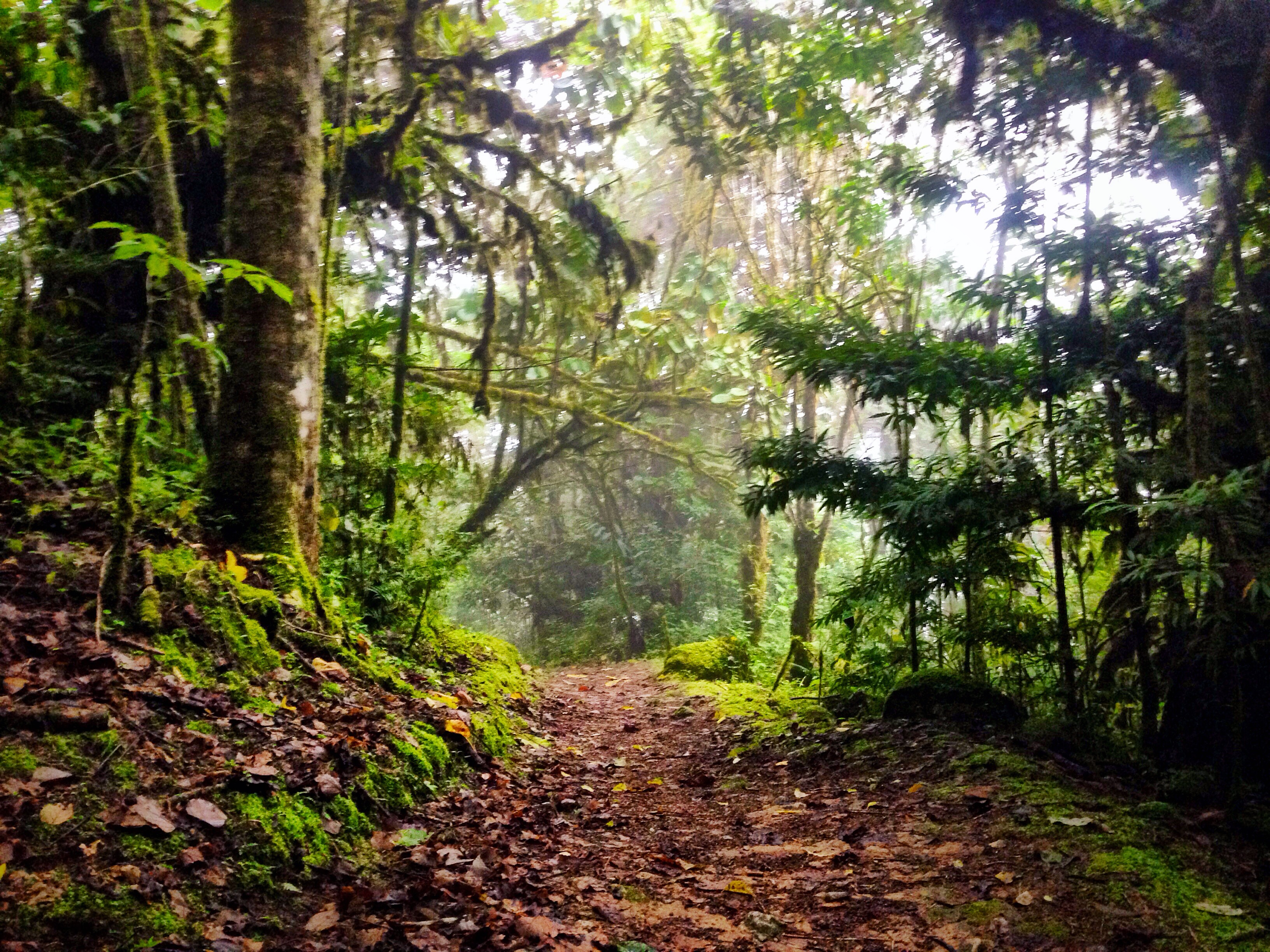 I was born into a well-to-do family that was not always that way. I went to a public high school. I liked it. I played every sport that I could, and I sang in the choir. When it came time to apply to colleges, I applied to Duke early action. I received my acceptance letter on December 15th, 2010.

Four years later, I graduated with distinction with a degree in Environmental Science and Policy, feeling pretty exhausted.

I went home in early July. I packed my clothes, the book “Wild”, and a pair of rubber boots into a backpack. I hopped on a plane, and moved to a farm in Costa Rica for ten months. I’m currently living at the top of a mountain, up the hill about a twenty-minute walk up from a small town.

It’s raining as I write this. Hard. The drops sound thunderous on the tin roof. My dirty feet are crossed in front of me, my back leaning against a large wooden post. I haven’t slept indoors properly in several months. The Merriam-Webster dictionary defines progress as “a forward or onward movement (as to an objective or to a goal)”.

I’ve been thinking a lot about what progress means to me.

I’ve been thinking a lot about what progress means with respect to my life, my friends’ lives, and even the whole world.

I read an article recently written by a student at Colombia University. The author, a guy named Zach Schwartz, writes about his experiences while attending an Ivy League school (Colombia)—and in particular many of the things that he has found disappointing about it. He makes it clear that he is not only frustrated, and in many ways disillusioned, by his own experience at Colombia, but also by those of his peers (and what he has gleaned about students’ lives at top universities in general).

I breezed through the article, nodding my head in response to most of it, grimacing at certain parts. I finally got to a paragraph where he wrote, “Everyone seemingly has their shit together and yet is emotionally drowning under the surface. Students race to juggle more classes, internships, and clubs than other people. There’s a culture of comparison…and in reality none of it matters, but people sacrifice their mental health to be king of that pile of bones.”

I smiled ruefully, my face crinkling a little bit into a pained expression.

I wish I could tell Zach Schwartz that it would all get better out of undergrad. That all of those people that he writes about will emerge from the bubble of college renewed, released…set free, reenergized, taking time for themselves.

There’s a book I recently found on the shelves of the small library here on the farm called “My Name is Chellis and I’m in Recovery from Western Civilization”. In the book, Chellis talks a lot about hunter-gatherer communities, and in particular the aspects of their lives that she thinks that we can learn from them. One of them, frankly, is more leisure time. Another, is more time in nature—reconnecting to the world that we evolved to live in.

There was a particular passageway, a bit of prose stolen from the journalist Kent MacDougall from what he titled “The Harried Society”. Speaking of the Algonkin Native Americans he writes “Back in 1609 when the Algonkin Indians discovered Henery Hudson sailing up their river…they were living off the fat of the land. They lived so well yet worked so little that the industrious Dutch considered them indolent savages and soon replaced their good life with feudalism. Today, along the Hudson River in New York, supposedly free citizens of the wealthiest society in the history of the world work longer and harder than any Algonkin Indian ever did, race around like rats in a maze, dodging cars, trucks, buses, bicycles, and each other, and dance to a frantic tempo destined to lead many to early deaths from stress and strain”.

But this is not what I would tell Zach Schwartz. I couldn’t tell him that, truthfully.

I would have to tell him that some people will find all of those things, but overwhelmingly in my experience many people leave college pretty exhausted, and just looking for the next thing. I would have to tell him that most of us half stumbled, half leaped into the future—shocked and a little terrified. Yikes. “The real world”. And maybe that is normal. But what seems wrong is that in our stumble/leap a lot of us ended up continuing on amidst our own little island, stuck in a headlong rat race towards…what exactly? This is what I’ve begun to ponder high up on this mountaintop…

I think it’s no surprise that we live in such a high-speed world of unparalleled consumerism and “wealth”, but suffer from so much violence, psychiatric disorders, and ecological destruction. Perhaps we are just connected to all the wrong things, in all the wrong ways.

Hank Lentfer, manager of the Nature Conservancy’s Gustavus Forelands Preserve in Alaska writes, “Our senses get overwhelmed by the constant flicker of screens, the tang of exhaust, the whine of engines and the obstruction of earbuds. Eyes and ears fill and clog, growing dull with overuse. We’re nurturing a collective deafness. It seems that the louder things get, the less we hear”. Maybe this is part of the difficulty, or a large part of it—what so many environmental campaigns run up against: it is hard to get people to care about the environment when they never see it, or better yet, when they never have the time or space or mindfulness to truly really experience it, to live in it. There are so many people in this world, for the first time ever, who have never been immersed in the outdoors, in spaces not dictated by the touch of humanity. They have never had the privilege of looking around and realizing that we are but small parts within the larger whole… interconnected centers of energy, bits of the cosmos, separate and yet one. In today’s modernized world we have created so many barriers between us and the earth and the sky that we have become disconnected from important aspects of reality. We are too busy rushing around lost in our strange human-made, manicured spaces, that I worry that we have lost a greater perspective. The situation has become so extreme (and in my opinion, so dire) that we now have words that we use such as “the environment” or “nature”, as if we and the natural world are separate entities. When did we so dramatically forget that the world is a part of us, and we a part of the world? When did we lose that understanding?

We are terrified of the world that we once knew, the one that we evolved in. We hold “the wild” at a distance. This seems, to me, to be the root cause of much of the environmental destruction we see in the world today. We forget that in destroying the earth, we destroy ourselves. This is not a fight, and certainly not one solely for environmentalists. This is a need for massive healing.

It is hard to get people to care, to reevaluate, to revalue, when they hardly have the time to do so. When they have never been given the chance to look around them, or to spend a day in the woods. When they have lost the magic found in the little things. When they can no longer pinpoint from where their food came. When their days are completely dictated by the clock, rather than the sun and the moon.

When you cannot see what once was, it is impossible to think that perhaps we went the wrong way somewhere.

When you cannot step away, it is impossible to reflect inwards.

My name is Anne, and I too am beginning to feel like I am in recovery from western civilization. And that maybe, just maybe, we all need a bit of one.

At least a little more time, and quite a few more walks in the woods.