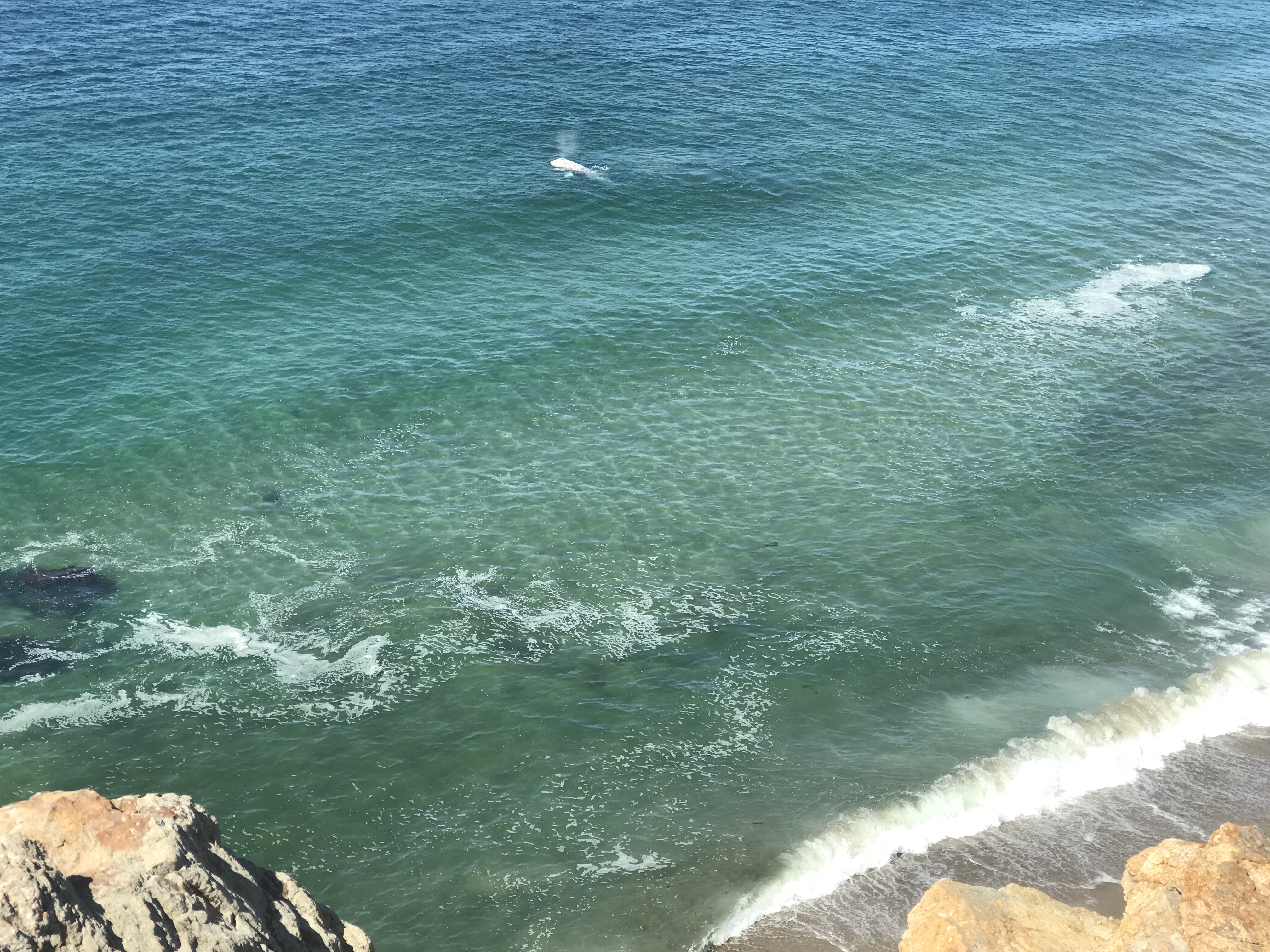 It was the first truly warm day in Malibu, California—nearing 70 degrees. The sun had come up early, and sunshine poured down over the landscape in long sweeps of gold. I looked eagerly out the car window, feeling ecstatic about the weather.

My boyfriend Kipp, his friend Bruce and I had decided to celebrate the summery day by going paddle boarding. The waves were small, and the water glassy—about as good as it gets for traveling long distances standing upright on a board. I’d been watching grey whales pass north up the coastline all month. We hoped that if we were lucky, we just might see one of these amazing cetaceans up close.

Padding the ends of the paddleboards and settling them into Bruce’s truck bed, we hopped in and set off down the Pacific Coast Highway on our way to Paradise Cove. A small restaurant and bar popular mostly among tourists, Paradise Cove provides some of the best ocean access to the Point Dume State Marine Conservation Area (SMCA). It’s a beautiful spot, with a wide, sandy beach and unobstructed views of the nearby sea cliffs.

We parked the car, and carried our paddleboards awkwardly across the parking lot, over the rocks and onto the sand next to the pier. After waiting for a break between sets, we walked our boards into the water and paddled out towards the open ocean, eyeing the long line of Catalina Island beckoning in the distance. Looking down into the water, I could see long giant kelp fronds (Macrocystis pyrifera) swaying gently back and forth with the waves. These amazing brown macroalgae support intricate underwater ecosystems, and make up beautiful ocean forests (a scuba diver’s dream to explore).

Settling into environments of depths between 2 to 30 meters, kelp need clear water conditions to obtain the light that they need to grow. They do best in cold, high-nutrient environments, such as those off the coast of Malibu, and the nearby Channel Islands.

Most of the fronds were thick and heavy, and I guessed them to be a couple of years old. Giant kelp, unlike the annual bull kelp found in more northern latitudes, is a perennial. It must tightly cling to the ocean floor in order to withstand strong winter storms year after year. The fronds grow incredibly fast, and scientists in Monterey Bay have recorded some fronds lengthening by up to ten to twelve inches in a day. Tiny flotation bulbs attached to the “leaves” help kelp grow upwards through the ocean water towards the surface.

If I gazed down through the fronds long enough, I’d spy flickering bright orange shapes moving through them. The orange flashes were not figments of my imagination, but rather garibaldi fish.

Garibaldi never cease to amaze me. The largest of the damselfish, they (along with the blacksmith) are unique in that they inhabit the subtropical waters of Southern California and Baja California’s west coast (most species of damselfish are found only in the tropics).

Garibaldi are protected from fishing here, and inhabit rocky reefs and kelp beds along the exposed coast. The fish are small—reaching generally about a foot to two feet in length. They feed primarily on bottom-dwelling prey—feasting on worms, sea anemones, sponges, crabs, sea stars and other creatures.

As I was watching the garibaldi, a sea lion popped his head out of the water about 15 feet away from us, giving our boards a long stare. He seemed curious about what the three of us were up to.

I knew of a sea lion rookery not far ahead on the rocks just underneath the point, a magnificent and protected headland. When I listened closely, I could hear the barking of a few males—likely competing for females and territory on the rocks.

Sea lions here congregate in large groups wherever they can find an outcropping to sun themselves on—resting and warming up after long swims out to sea to feed. On the rocks, the males fight to protect their harem of females (and to mate with them in the summer months). They aren’t quick on their flippers, and seem to rely primarily on intimidation tactics to ward off trespassers and devious younger males. Threatening to bite each other, two males in a dispute will writhe their necks around before taking quick jabs at each other, snapping their teeth.

The females generally seem unimpressed by the spectacle—content to lie with their pups before slipping back into the sea with the rising of the tide. The sea lions will mate in the summer months (May to August), and the mothers will give birth to their pups on shore around a year later.

California sea lions are typically rather long-lived, with a lifespan of between 20 to 30 years. However, recently the local population of sea lions has taken a serious hit. Numerous sea lion corpses have washed up on shore, many of them young pups.

There are numerous potential causes for the die-off, but scientists think that the most dire threat facing sea lions now is climate change. Warming waters have changed the distribution of the sea lions’ main sources of prey. Now, squid, anchovies, mackerel, rockfish, and particularly sardines seem to be moving to colder water (further away from the coast.) As a result, sea lion mothers must swim greater distances to get the nutrition they need—taking them away from their pups for longer periods of time, and leaving the mothers exhausted. NOAA has reported a “California Sea Lion Unusual Mortality Event” for the years 2013-2017, siting elevated strandings of abandoned sea lion pups up and down the coast. Pups have appeared alone on beaches emaciated, dehydrated, and underweight—straining the resources of wildlife rehabilitation centers.

Seeing the sea lion ahead of us swimming placidly past us, before diving down through the kelp with a flick of his back flippers, was a reassuring sight. However, I know that the challenges facing this species have likely just begun. If waters continue to warm, these beautiful animals will likely also begin to suffer from toxic algae blooms, the kind that mammals further up the coast have already fallen prey to.

Continuing to paddle north along the coast, we finally saw what we had been hoping to see—the spray of a whale coming up for a breath of air.

While both grey and humpback whales migrate up the California coast towards their feeding grounds in the Arctic, I have mostly spotted gray whales these past few months. They seem to love the rocks off of Point Dume, scraping along them to rid their skin of pesky barnacles and parasites. The mothers then take their calves close to shore (often a mere 30 feet off the coast) at Westward Beach to roll in the sand and amaze spectators with playful spy hopping and lob-tailing. Gray whales are truly a remarkable species. Nearly hunted to extinction by whalers, they were finally removed from the United States Endangered Species List in 1994, after years of international efforts to protect them. Each year, these amazing whales travel over 12,000 miles round-trip, migrating from their summer home of Alaska down to Mexico to breed in the winter, and then back up the coast again.

In Malibu, and at many places in California, we are lucky enough to see these whales close to shore, as they attempt to avoid some of the predators found in deeper waters (mainly killer whales). Interestingly, just north of where I live is one of the most dangerous parts of the whales’ journey: Monterey Bay. In crossing the bay, whales must swim over an underwater chasm nearly as deep as the Grand Canyon. It’s in this bay where whale watchers have actually caught on camera killer whales attacking and even killing gray whale calves.

Today, however, the whales seemed at ease as they passed us, diving and coming back up for air, one throwing up a flipper lazily before sliding back into the sea.

Suddenly, Bruce let out a yell. A calf had come up almost underneath him. While significantly smaller than their mothers, gray whale calves still weigh between 1,100 and 1,500 pounds at birth, and stretch at least 15 feet long. It’s hard to fully appreciate the gigantic size of these animals until you are up close. I’d seen photos of the whales swimming underneath paddle boarders, but this was the first time I’d seen anything like that up close.

There is something truly inspiring about whales. They are so mysterious to us in so many ways—massive sea giants undertaking extraordinary journeys. It’s a gift to share their world, even just for an afternoon.

In the past, three populations of gray whales existed. Humans hunted the North Atlantic population to extinction, and the Korean population, although not gone entirely, has struggled to rebound. Thankfully, after the International Whaling Commission (IWC) gave the gray whale full protection in 1947, the population migrating up the west coast of North America (the eastern North Pacific population) seems to be increasing, reaching a size of roughly 20,000 individuals.

We stopped paddling, and just watched the whales as they journeyed on north. We could mark their progress by the occasional dorsal hump sliding up and out of the water, a few blow hole sprays, and the characteristic disturbance of the ocean’s surface when something huge lurks just beneath it.

We eventually turned the paddleboards around and headed home (finally noticing just how burned my shoulders had become). As we paddled, looking out across the blue ocean surrounding us, I couldn’t help but imagine what this planet would be like without the species we’d seen that day. Sure, we’d still have the waves to catch, and the beautiful blue sky. But could we bear to live in a world that has lost such magic—the magic of sea lions and whales, of bright orange fish and waving kelp beds?

Of course, on an even darker tone, do we know if we can even afford to lose these creatures? Would their disappearance mark the catastrophic failure of the entire ocean ecosystem here, and our wellbeing (survival) along with it?

All I know is, I don’t want to find out. Decisions such as rescinding the Clean Power Plan are far reaching—affecting everyone and every corner of this world. Using toxic shampoos and other body products, and improperly disposing of plastic trash have consequences far beyond the moment when they leave our lives. It’s time that we as a species own up to our decisions, and commit to a new future—a future that includes all of the stunning wildlife that we so love.