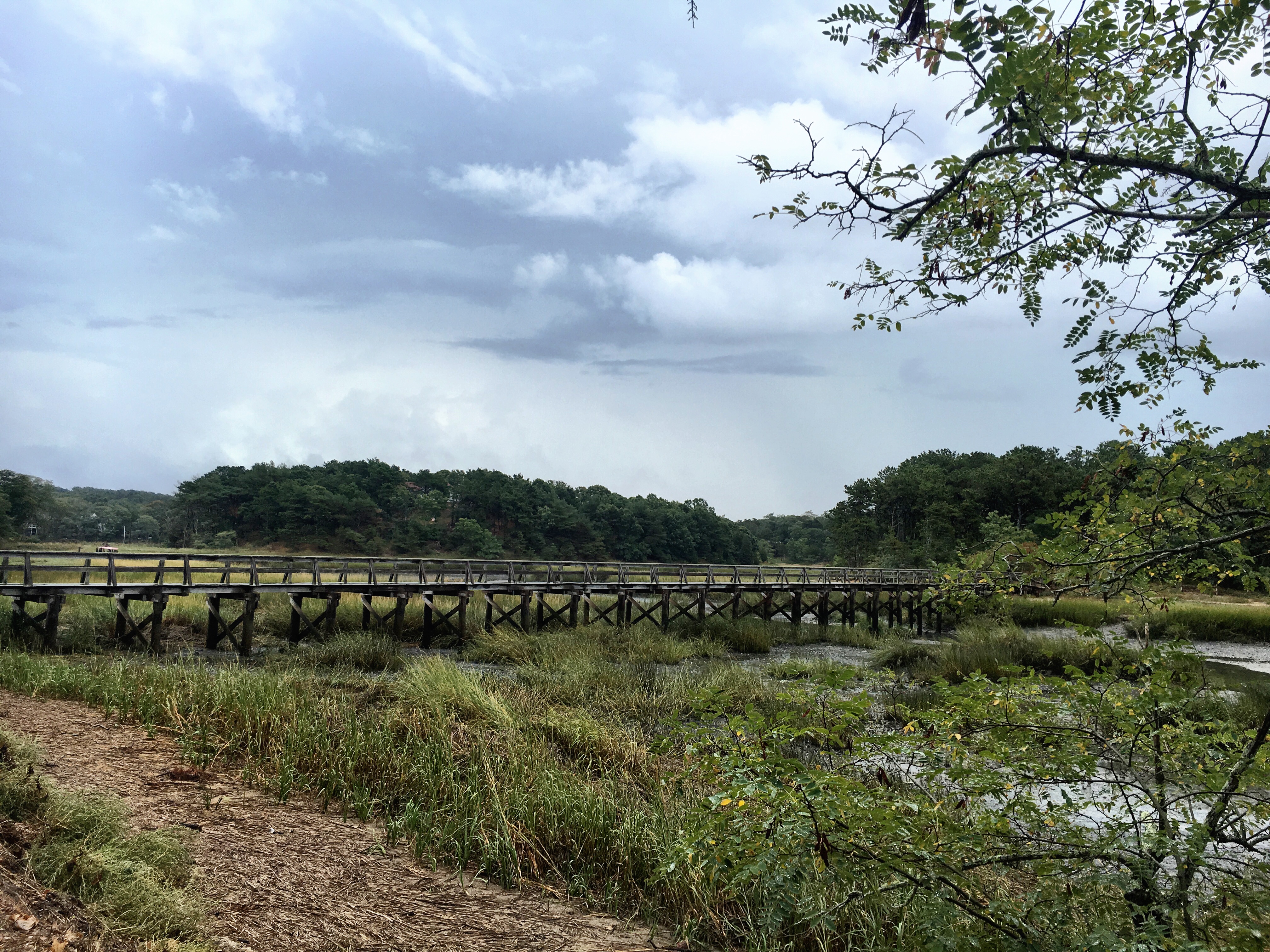 I woke up early, just as the sun was beginning to soften the night’s hold on the world. I ate breakfast watching the tree leaves reappear under a sky steadily filling with light.

This is my favorite time of day—before most people are awake. It is a time marked by silence.

Putting on my shoes, I headed out on a run. We were camped in my friend’s driveway in Wellfleet, a sleepy town (in the late season) located near the tip of Cape Cod. As the sun rose higher, I turned in the direction of the sea. The pads of my feet tapped the ground, lightly pressing into the cement and bounding me forward in the direction of where I knew the waves were waiting patiently. Thick and salty, the air felt somehow exhilarating, even as it stuck to my hair and made me sweat.

A few miles in to my run, I reached the pier stretching out into Wellfleet Bay. The water was calm, almost glassy, and shimmered pale blue in the early light. I veered left, following the gentle coastline until I arrived at a slender wooden footbridge reaching out over an impressive salt marsh.

The wooden slats of the bridge were thick and worn. Softened by salt water and ocean humidity, the wood offered my feet a welcome change from the hardened road. As I arched my way over the tall salt grasses, I began breathing in the smell of mud. A few herons walked carefully through the wet wonderland beneath me, tilting their sharpened beaks towards pockets of thick grass.

I love watching herons hunt. They are intense birds, unflinching in pursuit of their prey. Every move of theirs appears calculated, and even their flight seems restrained and unhurried.

Of course, herons are not the only species to inhabit salt marshes. Thousands of species make their homes in these overlooked ecosystems, some of the most productive in the world.

Historically, salt marshes like the one in Wellfleet have been filled, dredged, drained, and used as landfills for pollutants and trash. Vilified as breeding grounds for mosquitoes and described as unsightly and smelly, few people understood the vital role salt marshes play in the life cycle of both coastal and many oceanic species.

Thankfully, scientists and the public have begun to wake up to the value of salt marshes, the birthing place of so many of the plants and animals that we love and even depend on. New state and federal policies have helped to curtail the abuses leveled on these defenseless areas, and slowly more and more parcels of this precious habitat have been protected. Today, salt marshes comprise 7% (1,700 acres) of the land within the National Seashore. By analyzing aerial photographs taken between the years of 1984 and 2013, Cape Cod National Seashore plant ecologist Stephen Smith observed major changes in the ecology of local salt marshes. By comparing the images, Smith calculated that in the past thirty years 190 acres of high marsh grasses have disappeared. Between 24 and 48 percent of high grass vegetation in five of the six sites studied are now gone. Unfortunately, the sixth study site, Pleasant Bay, faired even worse. Due in part to the development of two new inlets, which allowed for higher area tides, Pleasant Bay incurred a devastating loss of a whopping 92% of its traditional high grass habitat.

In response to changing sea levels, while high marsh grasslands disappeared, low marsh grass habitat actually increased in size by 131 acres over the same time period. Low marsh grass has greater tolerance for low oxygen in the soil and can endure higher levels of salt and toxins.

While salt marshes have evolved over thousands of years to withstand occasional flooding, it is clear that frequent inundations of salt water have become the norm recently as the sea continues to rise—with corresponding ecological changes.

While salt marshes could potentially survive by moving inland and establishing themselves over higher ground, coastal development, high banks, and other topographical challenges have hindered or entirely blocked their retreat.

Sea levels in the area have risen an estimate 6.3 inches since 1984, and salt marshes seem unable to migrate further inland or accrue enough organic matter through vegetative decay or sedimentary deposition to adapt. Following Smith’s study, it has become clear that the long-term survival of these salt marshes is seriously endangered, as the growth of low marsh grass has not matched the decline of high marsh grass, and rising seas could soon wipe out low grass areas as well.

Unfortunately, the destruction of salt marshes will only increase the overall impact of sea level rise further inland by weakening the shoreline’s natural defenses against storm surges. Many commercial fish species that depend on salt marshes to nurture their young will be threatened or face extinction, and oceans will suffer from the influx of unfiltered water flow coming from inland areas.

If we fail to act now, many salt marshes will likely develop into mudflats or (assuming high water quality) into sea grass. Unfortunately, neither of these two ecosystems can come close to sustaining the incredible diversity of life that salt marshes currently support and nurture.

Climate change demands to be addressed by changing agricultural policies, changing energy policies, changing public policies, and yes, making new lifestyle choices. In the short term, we can work feverishly to improve the health of the beautiful salt marshes we have left in an effort to better equip them to fight back.

Pollution must be halted, meaning that we need to look hard at what chemicals, medications, and other products we use in our homes and ingest ourselves (as many of these products end up being flushed down our drains and toilets). It’s imperative that we trap and properly treat storm water and sewage. We need safe and responsible disposal of debris, trash, and other pollutants, and we should be pushing for biodegradable and environmentally friendly products, solutions, and devices.

In this country, we have long sought to engineer and control our rivers, to usually deleterious effects. Salt marshes depend on naturally flowing, healthy rivers to restore vital levels of organic matter, offer clean fresh water, and supply the area with appropriate levels of nutrients. It’s time to begin to remove dams, culverts, and other structures that inhibit the natural behavior and life-giving properties of our rivers. And it’s time to begin thinking about preserving and protecting the watersheds that flow into these streams. Finally, we can pay attention to our past.

In the early 1900s, digging “mosquito ditches” became a public works project as part of an attempt to lower mosquito populations in Cape Cod and to create new (albeit temporary) local jobs. Unfortunately, the creation of these ditches sparked accelerated erosion within the salt marshes, and provided (unintentionally) ample habitat for the purple marsh crab.

Unfortunately, purple marsh crabs voraciously eat cordgrass and burrow into muddy banks, destabilizing the end of the marsh, widening the ditches, and increasing the inflow of salt water and encroachment of the high tide. It’s imperative that we begin thinking of ways to rebalance the ecosystem—protecting and encouraging the populations of striped bass, blue crabs, and shore birds to return and bringing purple marsh crabs down to manageable numbers.

I saw many hundreds of these crabs on my run, to my chagrin. Stepping over them as gracefully as I could, I circled around the little spit of land at the other side of the bridge, enjoying my little island of trees surrounded by swaying marsh grasses and a gently undulating stream making its way towards the sea.

I returned to the bridge, stopping halfway across it to look out across the marsh once more and out to sea.

We live in such a beautiful world, one filled with such a variety of life that until you see it you can sometimes barely believe it’s true. I am so thankful for our mountains and our oceans, for our rolling grasslands and thick forests, for our bogs and salt marshes, for our rivers and streams and lakes and ponds. We live in a life web, the integrity of which depends on the strength of each individual strand. I hope we choose well in the coming century. I hope we work hard to preserve all things natural and free. I can’t imagine a world without places like these.