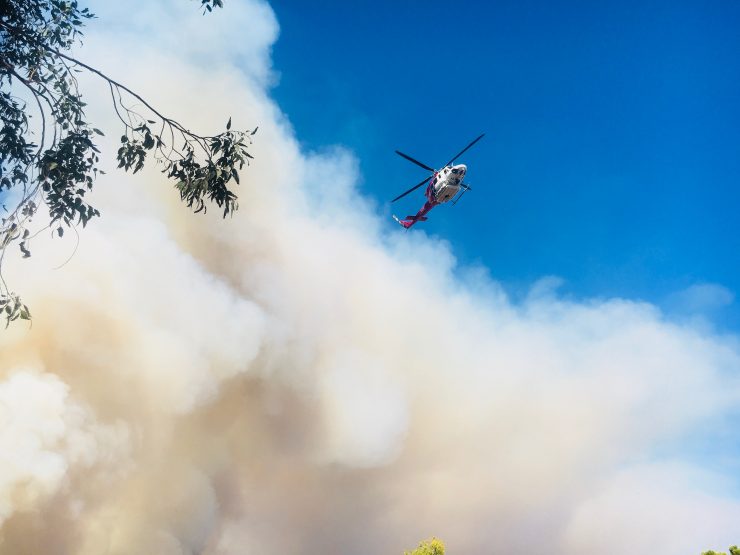 I was watching the news with increasing concern as wildfires raged in Northern California. Finally, my phone lit up. I scanned my uncle’s text in a rush. “Left this morning. I think we still have a house,” it read.

My uncle Paul and aunt Patty have lived in the hills outside Sonoma for as long as I can remember. Growing up as a kid, it was always a huge treat to go visit them. We’d drive into San Francisco and eat in Chinatown, relax along the foggy coast, and tour the local Sonoma wineries. Some of my happiest childhood moments were spent checking out my uncle’s beehives, watching little newts swim around in the pond, and lying out under the California sunshine. Sadly, on the night of Oct. 9 what became known as the “Northern California Firestorm” destroyed many of the places I’d grown to love as a kid, including my aunt and uncle’s house. Scorching the entire property and burning every tree, bush and beehive to the ground, the Sonoma County Fire destroyed 99% of what my aunt and uncle owned in an instant, reducing one of my favorite places in the world to ash. My aunt and uncle escaped with their lives and good spirits, but little else (a suitcase of clothes and two pillows, to be exact). Sadly, fires devastated much of California this year. In just 12 months, nearly 9,000 wildfires tore across the state, destroying over 10,800 structures, causing well over a billion dollars in damage, and killing at least 46 people.[1] Over the course of the year, as flames lapped the earth in places as far north as the Oregon border and as far south as San Diego, it began to feel as if no region would escape untouched.[2] Most frighteningly for me personally, the Thomas Fire erupted on Dec. 4 just 20 minutes from where I live in Souther California. This behemoth of a fire quickly grew into the largest wildlife in California record, destroying over 280,000 acres and forcing thousands from their homes.[3]

The question that quickly began to circulate was, “What caused so many devastating fires this year?”

The answer isn’t clear-cut, as there appear to be a variety of interrelated factors (most notably climate change, drought conditions, a bark beetle infestation and the Santa Ana winds) that coalesced into the perfect storm.

A couple years prior to the fires, the state was in the midst of its driest four-year period on record. Extremely low precipitation and warming temperatures caused by climate change meant that by 2014 most of California was experiencing serious water shortages. [4] Drought weakened California’s trees, especially along the Sierra Nevada. Unable to produce protective pitch, the state’s stressed trees fell began to fall prey to bark beetles (a pest they are normally able to fend off). Together, dropping water levels and bark beetles have killed over 102 million California trees since 2010, decimating over 7.7 million acres of forest habitat.[5] To sighs of relief, the 2016-2017 El Niño winter finally ended the nearly five-year California drought disaster. Unfortunately, heavy snowfall and rain blossomed into a surge of new plant growth. The trees and brush that grew rapidly during this time (unaccustomed to water scarcity) bloomed and expanded above ground instead of developing deep roots. When an unusually hot and dry summer followed the much-needed rain and snow, many of these plants began to brown and die. Joining the state’s millions of dead and dying trees, the majority of the once-green underbrush shriveled into the perfect fuel for colossal fires.[6]

By September, scientists announced that 2017 had brought with it the warmest summer on California record.[7] The hope and relief brought by the rain and snow of the winter months began to evaporate along with the state’s ponds, creeks, and rivers. Water levels were again dropping, and still the fall rains refused to come. It started to look as if the drought wasn’t really over, after all. As the fire season dragged on well past its historical parameters, the Santa Ana winds began to blow. Before moving to California, I had never experienced anything like these hot and ominous winds. Santa Ana winds are strong, extremely dry gusts that originate in the inland desert areas. Gaining speed as they move through the canyons, the Santa Ana winds eventually descend down to the sea, parching the coastline with round-the-clock temperature increases. During one wind event, I woke up sweating to howling wind and branches scraping the roof. I checked the time: 3:00 AM. I looked up the temperature: 93 degrees (the average temperature that time of the year is 69 degrees).

When these strong, dry winds arrive, it’s not uncommon for loose trees and debris to hit power lines, creating sparks amidst a sea of dry kindling.[8] Once a fire begins, winds blowing up to 80 miles an hour quickly fuel the flames. In these conditions, fires can take over huge swaths of land within hours. This isn’t, of course, to say that some of the year’s fires weren’t caused by human error. The start of the Skirball fire, for example, has been blamed on a homeless encampment. However, drought conditions and strong Santa Ana winds increase the likelihood that a campfire or electrical fire will quickly escape and burn out of control in a way that it wouldn’t elsewhere. If we continue on our present course, California looks to be in trouble. Already, average annual temperatures have increased across the state by roughly 1.5 degrees F.[9] As California becomes increasingly crowded, urban areas expand and exacerbate the heat island effect—further reducing summer cloud cover and rainfall. Climate change is also expected to increase the variability between yearly temperature and precipitation levels, exacerbating the disparity between drought and normal years. The continual boom and bust cycle of rapid plant growth followed by mass die-off is a serious threat to fire control. We need to cut back on greenhouse gas emissions, commit to massive reforestation projects and invest in regenerative agriculture, and we need to do it now. It wasn’t over. Fires don’t just scorch houses. They also leave behind inches of loose ash, destroy protective root systems, and leave burn areas extremely prone to mudslides. The Thomas Fire stripped huge swaths of hillsides of vegetation around Santa Barbara and Montecito, California. When two days of heavy rain followed, massive mudslides and debris flows began to streak towards the sea. In the end, 20 people were killed and hundreds of homes were lost as immense rivers of mud and rocks descended upon Montecito and neighboring areas. Highway 101 was closed for days, and thousands were ordered to evacuate. [10] The Aftermath of a Natural Disaster

The aftermath of the fires and mudslides are of course what we’re dealing with now. My aunt and uncle were lucky. They had good fire insurance, and thankfully, a friend of a friend was able to provide them refuge in their guesthouse. This was a boon, as housing in many of the fire-affected areas is scarce (not just for those who lost their homes, but also for contractors and construction workers). Much of California is still reeling from the damages and loss of life, even as the rest of the nation has largely moved on.

Over the holidays, my aunt and uncle traveled back to Iowa, where the majority of my family still lives. On Christmas Eve, they received the good news that the city had approved the rebuilding of their house. On Christmas Day, my family presented them with a pool of money we’d collected so that they could begin to replant trees, build a new garden, clean their pond, buy new furniture and construct new bee hives—filling in for the things insurance money couldn’t provide. Towards the end of the night, my uncle presented my aunt with her favorite ring and earrings, jewelry he’d discovered blackened in the ashes of their home and secretly restored. They gifted all the nephews and nieces with “Sonoma Strong” T-shirts, part of a benefit to help victims of the fire. The cards read “Grateful for friends and family, who remind us that it is truly impossible to lose ‘everything.'”

No matter what disaster strikes a community, I’m always impressed and grateful for the grace that grows straight through the darkness of destruction. The audacity of love and hope isn’t just inspiring, it’s essential. The pulling together of friends and family reminds us of the things that cannot be taken away. The promise of the next day’s sunrise is that we have a fresh chance to do better. When I went home for the New Year, the smoke had finally cleared in Malibu. I watched the sunset in awe, so thankful that the skies were no longer clouded with yellow haze. My friends in Ventura and Santa Barbara had moved back home, hosing off the layer of ash on their houses and belongings, thankful that what they owned was still standing.

Where Do We Go From Here?

2017 was certainly the year of climate change natural disasters. Hurricanes ravaged Florida, Houston, and Puerto Rico. Fires consumed California, followed by terrifying mudslides. If ever there was a time to act, it’s now. It’s never been more clear. Climate change is here, and we’re woefully underprepared to pay for the consequences.

After the year we’ve had, it’s no longer the future I worry about it — it’s the present. The good news? There’s an army of people around the world investing all of their efforts into turning this planet (and our legacy as humankind) around. And if we all act in small ways, I know big changes can be brought to fruition. If we use our voices, our votes, and our actions collectively for good, I know it’s not too late to restore the Earth to a (hopefully more benevolent) glory. If we succeed, it will be the greatest accomplishment of modern human civilization. We don’t have to be Icarus. We can recede to safer heights. We can rethink our ways, we can pave a new path, and create a future for new generations that we can be proud of. The choice is ours, and the time is now.