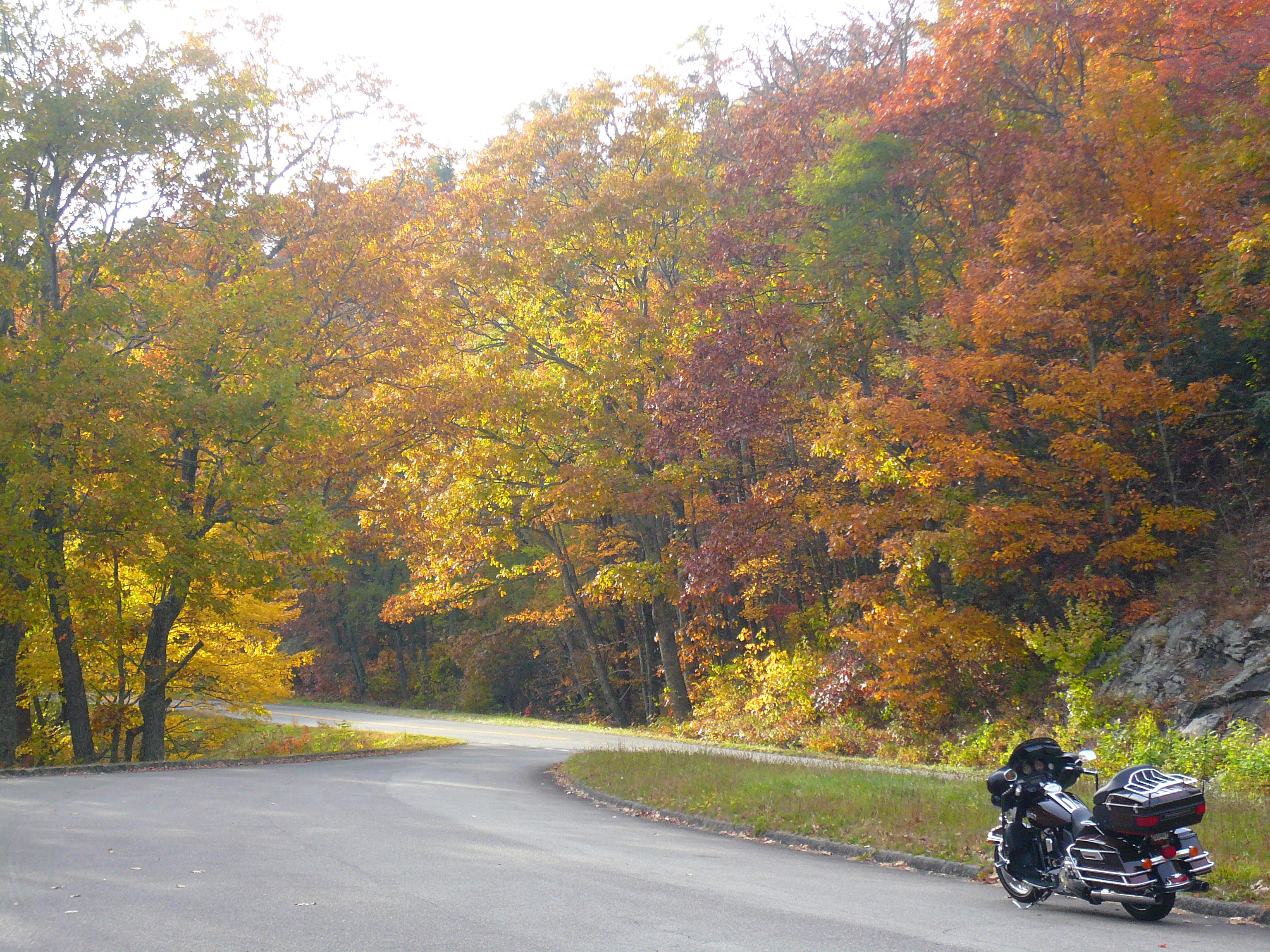 As a native North Carolinian, I’ve enjoyed “leaf season” in the Appalachian Mountains many times, and I try to get up to the mountains every year around this time to enjoy the view along the Blue Ridge Parkway. October is the best time for fall colors along the parkway, and various blogs (see here and here) and maps have been devoted to helping color seekers find the best spots.

Due to some cosmic law stating that everything happens at the same time, I was busy every weekend that the leaves were at their peak. But thinking about making the three-hour drive just to drive a few more hours along the parkway, I wondered if the mountains were better off without me anyway. Maybe the mountains are better off without all the leaf tourists. Just how much of an impact do all those cars along the parkway have on the environment? I decided to do some math. Using traffic data from the National Parks website, I did some back-of-the envelope calculations to determine, roughly (very roughly), how much CO2 is added to the atmosphere from people driving along the parkway to enjoy the spectacular autumn colors of the Appalachians.

My process is described below, or you can skip to the bottom to see the final number.

The National Parks Service keeps track of all kinds of visitor stats for their different parks, including the Blue Ridge Parkway. In addition to other data, they record traffic counts at various points along the parkway. I decided to use the counts from milepost 384 at US 74, about 20 minutes south of Asheville, likely a popular destination for autumn tourists. Having no way to know which cars are actually being driven on the parkway at any given time, I found the average gas mileage for the ten best-selling cars in 2014 so far according to Kelly Blue Book. I used city miles per gallon instead of highway since driving slowly and stopping often at overlooks is somewhat comparable to how city mpg is calculated. The average city mpg for these 10 vehicles was 23.4 miles per gallon.

For the purposes of this exercise, I assumed that average speed people drive on the parkway was 35 mph, given frequent stopping and a max speed limit of 45 mph.

According to the Fuel Economy Guide published by the DOE and the EPA, each gallon of gasoline burned puts about 20 pounds of CO2 in the atmosphere.

So let’s say you drive an average vehicle for an hour on the parkway at 35 miles an hour (not including time stopped at overlooks). You will have traveled 35 miles (at 35 mph). Traveling 35 miles at 23.4 miles per gallon, you will have burned about 1.5 gallons of gas, putting about 30 pounds of CO2 into the atmosphere.

Remember October had more cars than any other month. The difference between cars in October and the average for all the other months is 8,628. Assuming those extra cars are all on the parkway to see the leaves, leaf tourism in October accounts for 258,840 pounds of CO2 in the atmosphere, or 129.42 tons, every year.

Other things to consider

Obviously, there are some limitations to my analysis. I tried to be pretty conservative, so there are lots of ways my estimate could be too low. Most people probably aren’t driving brand new cars like the ones I used to calculate miles per gallon, and older cars, I’m guessing, have worse gas mileage. Also, I would think many people spend more than an hour driving along the parkway, but maybe not.

Most importantly, though, my calculations don’t take into account the amount of driving people do just to get to the parkway. Many people may drive 3 or 4 hours for a day trip or weekend visit to see the leaves.

So, what should we do? Is 129 tons of CO2 a year enough to get excited about? Maybe, maybe not. (For perspective, a typical coal plant emits 3.5 million tons of CO2 every year.)

I believe there is great value in allowing and encouraging people to experience and appreciate nature, even if it’s from behind a steering wheel. What incentive will people have to conserve nature if they never develop an appreciation for it? Why would they want to preserve an area they never get to see?

There are many ways we can put a price tag on nature to convince people of its value – measuring dollar values of services provided by natural areas, or determining how much people are willing to pay to maintain natural areas.

But there is no substitute for a personal appreciation for nature’s beauty. For me, at least, there is no dollar amount I could put on the wonder I feel when I experience for myself the rich tapestry of color that is the Appalachians in autumn.