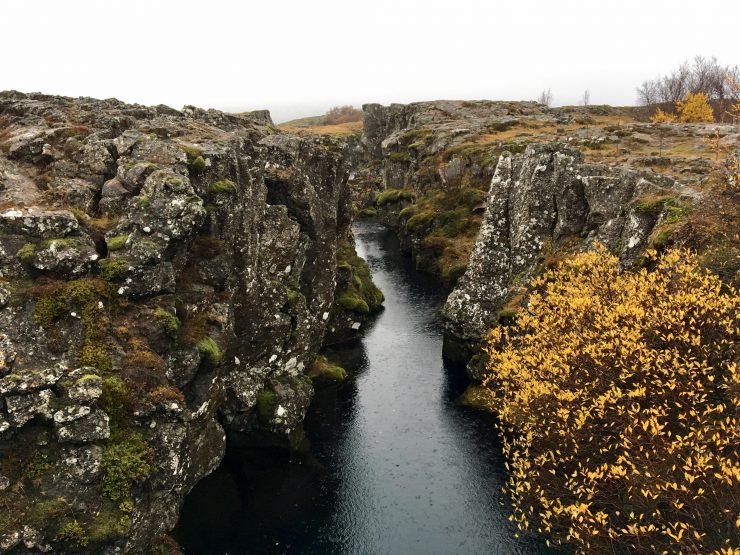 After my class explored Reykjavik, we hopped on a bus for an over two hour drive out to eastern Iceland. We were headed to Vatnajökull National Park to check out Jökulsárlón (pictured below), a glacier lagoon formed when Breiðamerkurjökull glacier started retreating away from the Atlantic Ocean. A result of Earth’s warming climate, the lake now stretches 18 square kilometers and reaches depths of 284 meters, making it the deepest lake in Iceland. My class walked along the edge of the lake, observing endemic species of vegetation and even spotted a seal off in the distances (the species was unidentifiable). Due to the high levels of rainfall that had been pounding Iceland during that time, large pieces of ice had broke free from the glaciers as sea level rose and the intensity of the flows out to the Atlantic increased dramatically. By the time we reached the park and explored it with our professor, it was approaching dinner time and we decided to turn in for the night. The next day, we intended to finally get to climb a glacier; however, mother nature had her own plans in mind. The rain made the conditions for the glacier too dangerous to walk on and our guides canceled the excursion. Despite our disappointment, Iceland has more natural wonders than you can see in a week so we had plenty of backup options. We headed to Sjónarnípa waterfall (pictured below), a 5-mile hike to a waterfall. We walked through the heavy downpour of rain until we finally reached the falls. The water was so clear and clean that our guides instructed us to drink directly from it, instead of paying for treated water back down at the base. After filling up our water bottles, we headed back toward the bus and headed toward our next destination. The last place I want to highlight during my Icelandic excursion is Þingvellir National Park. Located in Southwestern Iceland, Þingvellir is not only geographically important as a UNESCO World Heritage Site, but is also historically important to Icelandic history. It was here that Iceland’s parliament was founded in 930, a place where some of the first Norse settlers would gather to discuss laws, try criminals and partake in social activity. The name Þingvellir is derived from the Icelandic word for the Parliament, “Alþingi.” UNESCO declared it a world heritage site because it is the only land mass where one can clearly see the Mid-Atlantic Ridge on land, dividing the North American and Eurasian tectonic plates. The picture above is of the edge of the North American plate. Three kilometers behind me stood the Eurasian plate, meaning that the location I was standing to take the pictures is actually a “no man’s land” as the guide called it. It is a 3km stretch of land that grows every year and is made from the upwelling of magma from the Earth’s core that escapes via the plate boundaries. Iceland was a place like no other, that at some times made me feel like I was on a different planet. As the glaciers are only expected to last a few hundred more years, do not miss the opportunity to see them as today’s generations are some of the last people who will get to do so.